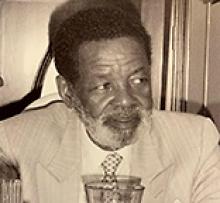 
On the morning of Friday, May 10, 2019 the world lost a remarkable man. We are heartbroken to announce the passing of Elliude Reginald (Reg) Hodge.
Reg was predeceased by his father Reynolds, his mother Ruby, as well as several brothers and sisters.
He will be missed beyond measure by his loving wife, Hortense; his devoted children, Hortense (Danny) and Gideon (Janice); his brothers and sisters; his many nieces and nephews; his close and lifelong friends and his numerous godchildren, many of who know him as Uncle Reg.
Reg was born the third of 13 children in Guyana in 1934. In 1957, he immigrated with his wife Hortense to London, England to enhance his education. That led him to his career in electronics /telecommunications which began in London. In 1964 Reg was hired by the London Head Office of AEI, an electronics firm, to become a tester in their Winnipeg office. The Hodge family, which now included his daughter Hortense and son Gideon, embarked on a new adventure by immigrating to Winnipeg. Reg was a loyal and hard worker with AEI, achieving management status and staying with the firm until his retirement in 1994.
One of his closest and dearest friends said that, "He was charitable from birth". What an apt description. He became a member of a fraternity (Independent Order of English Mechanics) while living in London and was one of the founding members of a chapter of that very same organization in Winnipeg. While with this beloved fraternity, which promoted charitable undertakings, he served in various offices and was so respected that he became a District Grand Master.
Reg also played an important role in welcoming new immigrants from Guyana, assisting them with adjusting to their new life so far from home. This would include helping them find work and housing all the while encouraging them every step of the way.
Reg had an inspiring passion for his favourite charity, Habitat for Humanity. He dedicated 25 years to the organization which included, after retirement, volunteering Monday to Friday five hours each day, lending his grace, kindness, expertise and skill. How remarkable, but not surprising for those who knew Reg. He was an extraordinary individual.
"Everything is copacetic," Reg was fond of saying. Only because he made it so.
A very special thank you to those friends who were able to visit him during his hospital stay and those who were by his side from afar.
A celebration of Reg's life will be held on Friday, May 17, 2019 at 2:00 p.m. at Thomson "In the Park" Funeral Home, 1291 McGillivray Blvd., Winnipeg, MB.
Flowers respectfully declined. If friends so desire, to remember his life that touched their own, donations can be made to any one of the following of his favoured charities: Habitat for Humanity Manitoba, 60 Archibald St., Winnipeg, MB R2J 0V8; Agape Table, 364 Furby St., Winnipeg, MB R3B 2V5; and Winnipeg Humane Society, 45 Hurst Way, Winnipeg, MB R3T 0R3.