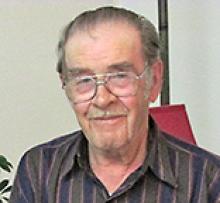 
George Wall passed away Sunday, May 12, 2019, in Beausejour, at the age of 82.
George was predeceased by his wife Annie, of 55 years, in October 2013. He is survived by his children: Evelyn (John) Nolt of Niverville, Janet (Martin) Nolt and Donald (Charlotte) Wall of Beausejour, eight grandchildren: Kevin (Carla) Nolt, Karen (Grant) Burr, Colleen (Kevin) Larivierre, Raymond (Hillary) Nolt, Angela (Carman) Cosens, Daniel (Mattea) Nolt, Melissa (Glen) Guimond and Eric Wall, 12 great-grandchildren: Damian, Caleb, Liam, Owen, Isaac, Eli, Angel, Cassandra, Alexis, Dayenne, Glen Jr. and Jasper, one brother Dave (Betty) Wall of Brandon, MB, and other relatives.
George was born on March 24, 1937 in Cuauntemoc Chihuahua, Mexico. He was the youngest of one sister and six brothers born to Cornelius and Justina Wall.
On a Sunday afternoon, George and friend were driving on a country road when they met up with Annie and her sister Susie and stopped to chat, and the rest is history.
George and Annie were married on April 20, 1958 in Winkler, MB. Soon after they were both baptized at the River East Mennonite Brethren Church in Winnipeg. Dad grew up with the love of farming. After he got married, he took up the career of plumbing which he carried on up until he couldn't do it anymore. In 1972, they moved out to Beausejour from Winnipeg where they bought their farm, which was a dream of Dad's. They farmed for 29 years.
Dad had a love for his family. He loved to spend time with his grandchildren and great-grandchildren.
Even though our hearts are heavy with sadness today, we carry memories that will bring smiles and comfort tomorrow.
A funeral service will be held on Friday, May 17 at 1:00 p.m. at Sobering Funeral Chapel, 1035 Park Avenue E., Beausejour, with viewing one hour prior to the service. He will be laid to rest beside his wife Annie at the Beausejour Town Cemetery.
Donations may be made in George's memory to the Manitoba Lung Association, 301-1 Wesley Ave., Winnipeg, MB R3C 4C6.