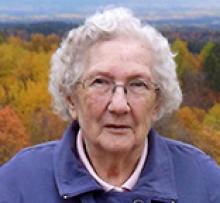 
Considered by all who knew her as a kind and gentle soul, Hildegard (Enns) Schroeder was born on February 4, 1928 in Speedwell, Saskatchewan to Jacob and Gertrude (Franzen) Enns, recent immigrants from Kuban, Russia, who had managed to leave the country in 1925, just before Stalin shut the door to further emigration. The family was grateful for the opportunity to settle in Canada, although it meant they never again saw many of their relatives who did not get out of Russia. With much of the prime agricultural land in western Canada already occupied by previous waves of immigrants, the Enns family struggled to make a go of farming on a homestead in the rocky soils of the boreal forest in northern Saskatchewan.
Like her siblings, Hilda completed the first eight years of her education in a one-room school in Speedwell. For high school, Hilda took correspondence courses and roomed with family in other centres. Church life was always important to Hilda and she was baptized into the Speedwell Mennonite Brethren Church at age 14. Following high school, Hilda attended Hepburn Bible School for two years, boarding with family who had settled near that community.
By the late 1940s it was clear that farming in the Speedwell area was becoming ever less viable and the family prepared to move to southern Manitoba, near Steinbach. Already a young adult, Hilda moved with the family. She enrolled in a business course and spent a year working at a jewellery store in Winnipeg. Hilda and other members of the Enns family joined the Steinbach Mennonite Brethren Church and that is where she met William (Bill) Schroeder, her future husband.
Hilda and Bill, son of Wilhelm W. and Sara (Doerksen) Schroeder, raised in Rosengart, near Steinbach, were married on July 8, 1951. In 61 years of marriage Hilda and Bill raised five children: David, Ruth, Bill (Jr.), Sandra, and Judith. The family moved a number of times as Bill's teaching career progressed. They served for three and a half years as missionaries in Paraguay and lived in several places in southern Manitoba: Gnadenthal, Rosenort, Winkler, and following their retirement, in Winnipeg.
In addition to caring for a lively family, Hilda's generous hospitality was extended to everyone she encountered. Although naturally shy and reserved, Hilda's calm and gentle personality shone through and she was highly regarded in various leadership roles she assumed in church groups, a local thrift store, among other endeavours. A skilled and prolific quilter, Hilda produced many fine quilts for family and friends. For each of her children she created artistically quilted renderings of two of the family's childhood homes, items which immediately became priceless heirlooms. In later years Hilda formulated memories of her interesting upbringing in a self-published memoir, "A Life of Joy" (2015).
Hildegard is survived by her son David (Mary Lou Von Niessen) with Matthew; daughter Ruth (Gilbert "Charlie" Levasseur) with Chantelle (Tristan Smith), Geneviève (Paul Yee), Thomas (Maritza Alonso Ortiz); son Bill (Zuweri Fero) with Shamisa (Alazaar Yeshitla), Mushana, Simon Fero (Amanda Schoenfeldt, with Rowen, Kyper), Sylvia Fero; daughter Sandra (Marlowe Rempel) with Henry, Naomi; daughter Judith (Jim Falk); brothers, Henry and Johnny, and sister Nan.
Hildegard was predeceased by her parents, Jacob and Gertrude Enns, husband Bill, brothers, Abram and Jack, and sisters, Adeline, Maria and Gertrude.
Hilda passed away peacefully at the Grace Hospital on May 12, 2019, with members of her family at her side.
Funeral services will be held at the Fort Garry Mennonite Brethren Church, 1771 Pembina Hwy., Winnipeg on Saturday, May 18 at 11:00 a.m. with a reception to follow. Private interment at St. Vital Cemetery.
In lieu of flowers, donations can be made to the Mennonite Central Committee.