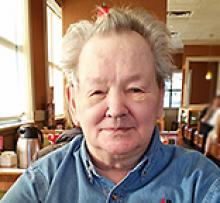 Henry Mozil of Vivan, Manitoba passed away peacefully on May 20, 2019.
Dad was born in Lampman, Saskatchewan on August 15, 1932 to James and Mary Mozil. In 1943 the family moved to Nourse where they set up the family farm, and Mozil's
General Store & Gas Station.
Henry was predeceased by his parents and his siblings, William, Kay and Bernie. Dad's greatest loss however, was the passing of his #1 grandson Kent Mozil in July 1996.
Dad leaves six children, Darrel (Diane Wazny), Greg (Marie Johnson), Kimberley (Geoff Johnson), Kevin (Jackie Paci), Bonny (Donald Baran), Marie (Dean Mineault), 10 grandchildren and three great-grandchildren, as well as his children's mother Violet Fetterly Mozil.
Dad wore many hats during his years, farmer, gravel truck owner operator, road builder, lumberjack, and horseman to name a few.
A Celebration of Life will be held on
Tuesday, May 28, 2019 at 11:00 a.m. at
Seasons Funeral Chapel, 576 Balsam Crescent in Oakbank. A private family interment will follow at Queens Valley Cemetery.
Flowers are graciously declined in favour of a donation to the Mood Disorders
Association of Manitoba, or Canadian Mental Health Association #LetsTalkAboutIt