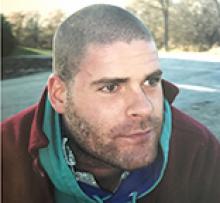 Aaron Joel Thiessen, aged 49, passed away on Thursday, May 16, 2019 at his home in St. Boniface, Winnipeg, MB.
Aaron is survived by his wife Michelle; son Austin; stepson Matthew; by his father Jake; sisters, Corrie (Jonathan) and Amie (Andrew); numerous nieces and nephew. Aaron was also survived by his birth mother Judy; and biological siblings as well as extended family and friends. Aaron was predeceased by his mother Martha.
Aaron will forever be remembered for his generosity and creativity.
A memorial service will be held on Friday, May 24, 2019 at 2:00 p.m. at the CanadInn Banquet Centre, 1034 Elizabeth Rd., Winnipeg, MB.
Donations in memory of Aaron may be made to Winnipeg Harvest at 1085 Winnipeg Ave., Winnipeg, MB R3E 0S2.