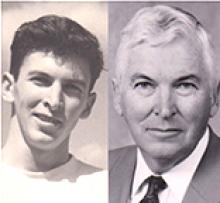 After a short illness, Jim passed away in the morning hours on May 16, 2019, at the age of 92.
He had a truly remarkable life of community involvement and service that spanned over 65 years. As a young man, he was an avid runner and set many provincial records at a time when runners competed on cinder tracks. He continued his love of sport all his life by coaching at various times with track clubs, at the University of Manitoba and much later, in his 80's, with a local high school long after he had retired. He always talked about how much he enjoyed coaching the many kids he met there.
Jim was instrumental in bringing the 1967 Pan Am Games to Winnipeg and became the Games' Executive Director. Because of his mantra - total community involvement - it was a highly successful Games. After that he worked at the University of Manitoba in the Phys. Ed. department as a coach and lecturer. Later, Jim founded the University of Manitoba Department of Private Giving, which successfully raised money for University of Manitoba, for their many capital projects. In Jim's honour, in 2015 the University renamed the indoor Athletics Facility the James Daly Fieldhouse. Over his entire career and well into retirement, Jim took on many volunteer jobs and enjoyed many accomplishments, including the Manitoba Marathon, the Canoe-athon, and working on the Indigenous Games and with United Way.
Jim sat on the board of the British Commonwealth Games for many years and served as the Chef De Mission for two games. He was also an avid tennis player and served on the board of Tennis Canada for eight years. Dubbed "Mr. Track and Field," Jim received many awards over his lifetime, but he was always a modest man. He was inducted into the Order of Manitoba in 2000, and made an Officer in the Order of Canada in 2001; he was also inducted into both the Manitoba and Olympic Hall of Fame.
Jim leaves his wife of 65 years, Barbara, and their four children: Tim, daughter-in-law Berrin (Fisekci) and their two sons, Kyle and Sean; daughter Robin Flynn, son-in-law Brian, and their two children, David (and his wife Sarah Klassen) and Jessica; son Jeff, daughter-in-law Calla (Wilson) and their two sons, Chris and Tom; and his son Brian. He also leaves his great-granddaughter Hailey Flynn.
Jim was fortunate in that he found his passion and was able to pursue it all his life, supported constantly by his wife Barbara. He loved sports for the healthy habits they nourished in people. While he coached track and field at the Olympic level, he was happiest when someone achieved a personal best. Later in life, Jim and Barb bought a cabin at Victoria Beach and spent winters in Arizona.
Jim was well known for decades in the Winnipeg sports scene and had many friends of all ages.
A celebration of Jim's life will be announced at a later time.
If so desired, donations can be made at the University of Manitoba, where Jim had set up a scholarship fund under his name for aspiring track and field athletes.
Not only did he give to the community, he also gave a lot to his family. We will miss him and will be forever grateful for all he did.