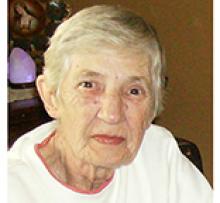 
Margaret passed peacefully away at Heritage Lodge, after several months of declining health.
Margaret was born in Glasgow, Scotland in 1939, came to Canada as a young woman, and made Winnipeg her home ever since. She married Arden Stewart in June, 1976, and they were together for over 30 years until his death in 2011. They both were members of The Sons of Scotland, enjoyed bowling, going to Robin's for coffee, and travelling, taking many trips in Canada to visit relatives, and to Britain to visit members of Margaret's family. She received her Canadian citizenship in December, 1979, and retained her Scottish accent all her life!
Margaret was an animal lover, especially of dogs, and had a dog as part of her family for most of her life. Her dear Mac predeceased her in 2015 and she was very lonely without him. She always made friends with the dogs who lived in her condo complex, and once she moved to Heritage Lodge, she grew to love Butterfly, the resident dog.
Margaret moved to Heritage in 2015 for health reasons, and became part of the family there, enjoying the activities, entertainment, going on outings and teasing the staff! A big thank you to the Heritage staff for welcoming Margaret, making her a part of things and taking good care of her.
Margaret was predeceased by her dear husband Arden in 2011, by brothers and family members in Britain, and by many of Arden's siblings and nieces and nephews. She is survived by family in Britain, in particular her sister, Margaret and John Anderson and their family; and by members of Arden's family in Canada.
A private service to celebrate Margaret's life will take place at a later date.