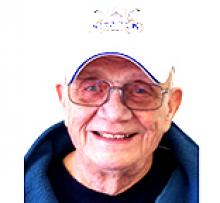 It is with great sadness we announce the passing of our beloved husband, father, grandfather and great-grandfather Fred on May 23, 2019, at the age of 86 from the dreaded disease, lung cancer.
He will be greatly missed by his wife Vera of 65 years, son Bob (Terry), grandsons, Dylan and Cory, granddaughters, Sara (Ian) and Robyn, great-grandchildren, Taylor and Epic, brother Bob (Lillian) plus numerous nieces and nephews.
Fred was predeceased by his son Douglas, parents, Fred and Kay, brother Ken, sister Dorothy and brother-in-law Victor, niece Kathy, daughter-in-law Nina and brother-in-law Ralph.
In the mid 1970s he held a President position at the Canadian German Society on McGregor Street and he was proud of introducing the ethnic dinner and dance at the club (i.e. Irish, Ukrainian, German with live bands).
Fred retired from the City of Winnipeg as a machine operator on April 19, 1991, moved out to the lake and enjoyed his retirement years to the fullest.
He was a very talented man who loved to fix or build anything that was asked of him and it had to be perfect.
During the early years in Winnipeg he was involved in 10-pin bowling for 25 years plus ice curling. Once he retired golfing was his passion; he even got a hole in one at Links of the Lake on the 14th hole. Then at the age of 70 he joined the Gimli Senior Centre and took up floor curling which he proved to be very good at by winning many bonspiels. His other passion was acrylic painting and was successful in selling several pieces.
Heartfelt appreciation and love is extended to all the family and dear friends for their kindness and support. Also, to the wonderful doctors, nurses, aides and staff at the Gimli Hospital.
In accordance with his wishes, cremation has taken place and no formal service will be held.
In lieu of flowers, if friends so desire, a memorial donation may be made to the Gimli Palliative Care, in care of I.E.H. Foundation, Selkirk Regional Health Centre, Box 5000, Selkirk, MB R1A 2M2, or a charity of their choice.