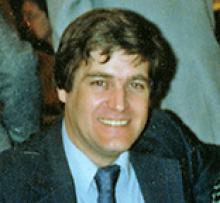 A kind and gentle man has left this world. Those of us who had the good fortune to have had John in our lives are deeply saddened. John was the heart of our family; he took on many responsibilities and did so much for us all.
John studied and worked as a photographer and through his photography, met his wife, Luella Levitt. She was an artist and had hired him to photograph subjects for her portraits. Their relationship grew into love and they married in 1985. They had many happy years together. When Luella became ill, John retired from his work and cared for her at home until her death in 2006.
In addition to his photography, John worked as a server, cab owner, and most recently at Shalom Residences helping people with intellectual disabilities learn life skills and independence. This was more than a job to John. After losing Luella, he turned his own sorrow into acts of compassion and care for others. He said: "I have a lot of love to give" and he gave it generously. He gained many friends at Shalom and had fun with them on vacations, at the Folk Festival and other outings.
Ever since he was a little boy, John loved to be out in nature. He was a member of Nature Manitoba and took part in the Christmas Bird Count and the Manitoba Chimney Swift Initiative. Bird watching was a favourite hobby of John's and in recent years, he went on birding tours to Peru and Vietnam. John enjoyed experiencing nature and the world and in his lifetime travelled to Europe, Guatemala and many destinations in Canada and the United States.
The arts were another of John's interests. He attended the Ballet, plays at the Fringe Festival, PTE and MTC. He also enjoyed attending concerts, the Folk Festival and Jets games.
Predeceased by his wife Luella; sister Jean; and niece Suzanne. John leaves to mourn his stepdaughter Jan (Art); parents, Kathleen and Joseph; brother Gerry (Doreen); sister Judy (John); sister Kathleen (Anne); brother Jim; nieces, nephews and many good friends.
John's home was a gathering place for dinners, games nights, his own wedding and memorials for his wife and sister. We invite all who knew John to stop by and share memories at a come-and-go celebration of John's life on Sunday, June 2, 2019 from 1:00 p.m. to 5:00 p.m. at 624 Sherburn St.
If desired, donations may be made in John's memory to Fort Whyte Alive or Shalom Residences.
John was not fanciful - he was practical and a realist - but let's pretend that he is never further away than the birds flying and singing all around us. He was a good man with a strong sense of how to live morally and ethically.

John lived a good life.
He loved a lot, gave a lot, was sad a lot and happy a lot. We miss you John.