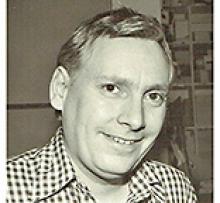 Following a brief illness, on May 13, 2019, Roger Bruce Henderson, aged 77 years, passed away at Seven Oaks General Hospital in Winnipeg.
He will be sadly missed by his two sons, Trevor (Colleen), grandchildren, Megan and Callum Henderson, and Lance (Kelly), grandchildren, Cassandra and Noah Henderson.
Roger was predeceased by his mother Dulcie and father Bruce (John) Henderson.
Roger was born and raised in Winnipeg. He was a dedicated employee for many years at Coronet Printers, he enjoyed old movies, listening to CJOB and watching NHL hockey. Roger was known for his soft-spoken, kind voice and caring heart.
The family would like to thank the home care team that helped tend to Roger's care and needs over the past number of years; we know he enjoyed your company.
A small private service is planned with immediate family.
In lieu of flowers, donations may be made to the Canadian Mental Health Association, 930 Portage Avenue, Winnipeg, MB R3G 0P8.