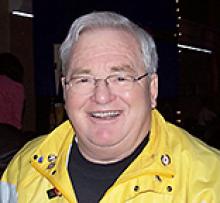 
It is with profound sadness that we announce the sudden passing of Larry on May 21, 2019.
He was predeceased by his parents Geoff and Ethel. Larry is survived by his loving wife Carol; his daughters Heather (Jeff) and Jennifer (Brent); grandchildren Kendall, Brayden, Isabella, Skyla and Wil; his brothers and sisters; and many nieces and nephews.
Larry was born in Winnipeg on April 2, 1939, and spent most of his childhood living in St. Vital with his parents and five siblings. He graduated from Glenlawn Collegiate and went on to work in the computer industry until he retired in 2001. Larry's true love was his wife, Carol, who he absolutely adored, his daughters Heather and Jennifer, his grandchildren, his family and his numerous lifelong friends who were also family. Larry and Carol met in 1963 and Larry was not going to let Carol slip away. He used his outgoing personality and thoughtfulness to capture her heart. They were married for 53 happy years and raised their daughters in the most loving home. Larry and Carol enjoyed spending time at Granite Lake and camping across the country with their daughters. So many childhood memories for his girls were created in KOA campgrounds across Canada. Larry loved helping others. He volunteered for everything, including the Children's Hospital Telethon for many years, and countless hours at many curling events. Larry was also an integral part in the creation of the computerized draw for the 100th anniversary of the MCA curling bonspiel that attracted a record setting 1,270 teams which he was very proud of. His love of sports was evident throughout his entire life. He enjoyed baseball, fishing, hunting, golf and curling. Larry also spent 34 years as a baseball umpire and a basketball referee.
For anyone that knew him, they will agree that curling was certainly Larry's favourite sport! His love and enthusiasm for the game of curling was what sparked the interest in the game for Carol, Heather and Jennifer. Having been a member since 1955, he always cherished his time and membership at the St. Vital Curling Club. He served as the club president in 1983 - 1984 and was a constant fixture at the club. He later found a real passion for coaching and teaching young curlers including both his daughters, Heather and Jennifer, and their curling teams. He went on to coach Jennifer to her first Scottie's title in 2005 in St. John's, Newfoundland. Due to his dedication and love of the sport, Larry was given an honorary life membership to the St. Vital Curling Club and the Manitoba Curling Association, which were both very special honours to him. He was widely known and respected in the curling community throughout Manitoba and across the country and, to honour his name and reputation, the Larry Jones Junior Bonspiel was created at his home club. It was always a highlight of Larry's year to be around the club to watch the future generations of the game he loved and to present the winners cheque to the winning team. Larry was so proud of the St. Vital and the fact that Jennifer and her team always represented "his" club around the world. To say that he never missed a game that Jennifer played would somehow be an understatement. He and Carol spent countless hours hitting the refresh button on the computer, watching games on TV and travelling around Canada and the world to be there in person for all of the biggest games and events. His calls from the stands for each and every member of the team, and especially for his home province of Manitoba, became a staple at the Scotties Tournament of Hearts over the last 15 years. Win or lose, he was always there for the post game hug, absolutely beaming with pride. He wore his pride for all to see.
Larry also volunteered his time to the many large and small curling tournaments held in Winnipeg and especially loved being the team driver for teams from around the world so he could have the opportunity to meet new friends. He was extremely outgoing and witty and could spark a conversation with anybody, which was one of his favourite things to do. Larry had nicknames for those close to him and loved to make jokes and "tease" which made him unforgettable. Everyone knew who Larry was, but the real value was in getting to know him. He was one of a kind. He would always call to say hello and make sure that his friends and family were okay. Larry had time for a phone call or a visit for everyone in his life and was never too busy. A special thanks to his friend, Joe, for his weekly visits to play crib which Larry always looked forward to. Larry's grandchildren adored their grandpa and his silliness and love of life will carry on in them. We will love you always Larry, Dad, Grandpa and Mr. J and miss you forever but never forget. Rest in peace and have a single malt scotch on the rocks for us.
A celebration of Larry's life will be held at Glen Lawn Funeral Home, 455 Lagimodiere Blvd., in Winnipeg on Tuesday, May 28, 2019, at 10:00 a.m.
In lieu of flowers, donations can be made to the St. Vital Curling Club Junior Program (286 Regal Avenue, Winnipeg, MB, R2M 0P5) or the Sandra Schmirler Foundation (www.sandraschmirler.org).