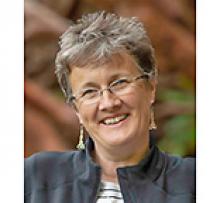 On Thursday, May 23, 2019, Faith Pritchard passed away peacefully, after a seven-year battle with cancer. She died at home, surrounded and cared for by her three daughters, Claire, Becky, and Sarah, and her husband of 33 years, Paul.
Faith is predeceased by her father Alasdair Dawson; her mother Katrina Dawson; and her sister-in-law Marion Dawson. She leaves behind three siblings, Christopher (Jan), David (Christine) and Emily (Gordon) Ackerman; her beloved Pritchard brothers and sisters-in-law; and many nieces and nephews who will miss her enormously.
One of Faith's "super powers" was her knack for forming strong, lifelong friendships. Consequently, she leaves a legacy of dear girlfriends, both in Canada and Scotland, who were a treasured part of her life and will also feel a deep void with her passing.
Faith was born on January 21, 1958 in Edinburgh, Scotland. She loved languages, so it was not surprising that at university she studied linguistics. A post-graduate degree in Personnel Management laid the foundation for her future employment. In 1980, she met Paul, then a young Canadian chiropractor working in Edinburgh, and after a long-distance, trans-Atlantic courtship, they married in 1986. Faith joined Paul in Thompson, arriving during a January snowstorm and subsequent cold snap, excited and determined to adapt to her new Canadian life. The community welcomed her, as only Thompson could, and Faith quickly grew to love her new "hometown". Despite being a loyal Scot, Faith was equally proud of Thompson and would not hesitate to tell anyone who asked what a great place it was - full of the most wonderful people.
Faith had a deep and enduring spirituality, which formed the foundation of who she was and how she lived. Her abundant love, generous counsel, and deep compassion for those around her stemmed from her devotion and peaceful communion with God. She cherished an abiding trust and hope in Christ, which strengthened and sustained her throughout life, especially during the past four years.
A Celebration of Life will be held on Saturday, June 1, 2019 at 11:00 a.m. at the St. Lawrence Catholic Church with a luncheon tea to follow.