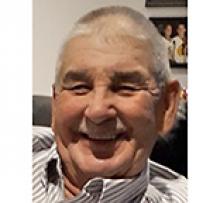 It is with great sadness that we announce the peaceful passing of Wilfred Garry (Toad) Chartrand at the age of 72 years at his home in West Pine Ridge on Sunday, May 26, 2019.
Garry was a loving and devoted husband to Sandra, an amazing and caring father to
Michelle (Clay), Jason (Leanne), and the proudest papa and grandpa to Thomas,
Nicolas, Connor and Spencer. Garry also
deeply loved his sister-in-law Lori Harke and brother-in-law Peter Harke. Garry is also
survived by many nieces, nephews, cousins and friends.
After working 38 years at Canada Wire, Garry earned his Class 1 driver's licence in 1994 and loved being on the road, especially his trips to Calgary which he drove right up to his last days with us.
Garry was an avid outdoorsman. He loved hunting, fishing, and quading with his family and friends. Garry was the hardest working man we knew; whether it was blowing his and his neighbors snow in -40, or landscaping the yard he loved so much with a wheel barrow and shovel at +30.
Garry loved watching Thomas and Nicolas play hockey and baseball. His smiling face and presence will be missed at those games by all.
He was an amazing friend to so many
because he genuinely cared and wanted to help everyone. Garry took the time to talk and listen to everyone, be it at the grocery store, the warehouse he was unloading at, or meeting someone on his walks with Max his dog. With Garry there were no strangers.
Garry will be laid to rest with his parents, Wilfred and Jean at St. Cecilia's Cemetery in Inwood Manitoba.
There is so much more we wanted to say to him; Garry left us too soon. He never wanted anyone to fuss over him and at his request, there will only be a small private family
internment.
In lieu of flowers, donations can be made in Garry's name to Camp He-Ho-Ha.
www.camphehoha.com