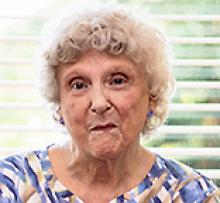 
Elizabeth Doherty, aged 87, passed away after a brave six-month fight with cancer. She survived surgery in December, managed through radiation therapy in the spring only to succumb to unexpected complications affecting her lungs. She passed away peacefully at the Health Sciences Centre in the late evening on May 27, 2019.
Elizabeth was born in Northern England on June 28, 1931. She was an only child who spent her early years in the turbulent days of the Second World War. She had many tales to tell, including how one evening her home was the only one to remain standing after a night time raid. It was during these times she learned the virtues of good humour and resilience that served her well all her days.
After the war she moved to Fleetwood where as a young girl she enjoyed playing various sports including tennis and rounders. She enjoyed ballroom dancing and it was at one dance, at the age of 16, that she met Thomas. They courted for three years, were engaged for two, and were married in May, 1953. She immigrated to Canada in 1959 with Thomas and their two young children (Peter and Gail). They settled in Winnipeg where they had two more children (Kathleen and Thomas). They were married for 63 years until Thomas' passing in 2016. Elizabeth held various jobs including many years in sales at The Bay, but her focus was on raising her family. She understood people are born with different gifts and she celebrated the diversity in those she knew. She made her children feel special and loved and she adored her two grandsons who were among her greatest joys.
Elizabeth's kindness, generosity and ability to listen drew many towards her. She was always very active and enjoyed movies, often seeing the latest blockbusters with her family and "binge-watching" shows on Netflix. After Thomas' passing in 2016, Elizabeth joined the Lions Club where she spent her Thursdays forming new friendships and maintaining her fitness.
She is survived by daughter Gail (Henry), her two sons, Peter (Sean) and Thomas (Kelly) and her beloved grandsons, Brendan and Connor. Her husband Thomas, daughter Kathleen, mother Phyllis and stepfather William predeceased her.
The Funeral Mass will be celebrated at 10:30 a.m., Monday, June 3, 2019 at Our Lady of Perpetual Help, 4588 Roblin Blvd., Winnipeg, MB (at the intersection of Roblin and Grant) with Msgr. Maurice Comeault, P.H., V.F. presiding. Interment will follow at Thomson "In the Park" Cemetery.
The family thanks the first responders for their help the morning Elizabeth went into hospital and the staff at the Health Sciences Centre for their support and care during her brief stay. The family also thanks the staff and friends at the Lion's Club for giving Mum so much happiness over the last few years.
In lieu of flowers, the family requests you donate to the charity of your choice.