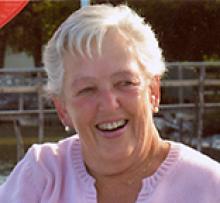 Anne was born and raised in Winnipeg, attended Riverbend School and graduated from Kelvin High School. She also attended the University of Manitoba and graduated from Normal School.
She is survived by her partner Ken Gray, daughters, Colleen (Rob), Lynda, Diane (Ron), and her son John (Kimberley).
Anne started her career writing a column at the Winnipeg Free Press. An accomplished professional, Anne eventually become the Executive Director of the Manitoba Chamber of Commerce through the early 1990s and also worked in marketing at both the Royal Winnipeg Ballet and the Western Canada Lottery Corporation. Her love of flowers and an entrepreneurial spirit soon found her owning a Grower's Direct store for over a decade with her partner, Ken.
Growing up she was a talented figure skater and eventually transitioned from skating to judging. She was a Canadian and International Skating Union (ISU) judge and whose judging took her all over the world. She was past chairperson of Skate Canada Manitoba (1968 to 1973) and inducted into the Skate Canada Manitoba Honour Society in 1991.
Anne's heart lived at the family cottage at Matlock where she loved to garden and entertain. Always an achiever, Anne was very concerned about the health of Lake Winnipeg and was a founding board member of the Lake Winnipeg Foundation while serving as president (2007 to 2009) and remaining active on the board from 2005 to 2011.
Her true passion was family and friends. She loved seeing generations of families playing in the water or enjoying a good game of bean bag across the front lawns. Anne had many friends and was a second mom to many, especially the children of her lifelong friends, lake family and friends of her son John.
The family would like to thank the staff at Selkirk General Hospital where she received incredible care and compassion. In particular Dr. Spencer and the caregivers on the second floor. In addition, the family would like to express their sincere gratitude to Dr. Brian Penner and staff (Karen and Jim) of the Hypertension Clinic and also Dr. Hani El-Gabalawy and staff (Tom and Lori) of the Rheumatoid Clinic both at the Health Sciences Centre for their years of care and compassion for Anne. Anne would also like to acknowledge the work of Physiotherapist Murray MacHutchon. Anne's answer to everything was "go see Murray!".
A celebration to remember Anne will be held at Niakwa Country Club on Thursday, June 6 from 2:00 p.m. to 4:00 p.m.
In lieu of flowers, donations can be made to the Lake Winnipeg Foundation.