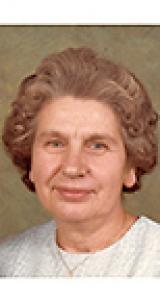 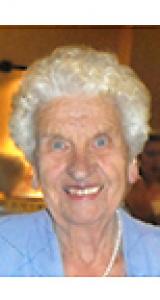 Peacefully on Sunday, June 2, 2019, Stefania passed away at the age of 97 years.
Stefania was born on March 19, 1922 in Ukraine. The Second World War brought her to Germany in 1941. She moved to Nottingham, England where she met and married her husband Mykola and had two sons born to them. In 1957 she settled in Winnipeg and worked as a baker and later ended her employment with the Winnipeg Police Service. Stefania was happiest when she was serving her friends and family in the kitchen. She also loved gardening and was a member of Sts. Vladimir and Olga Cathedral and Ukrainian Institute Prosvita.
She will be lovingly remembered by her two sons, Vasyl (Brenda) and Peter (Carrol); grandchildren, Lesia (Dale) and Christine (Scott), and great-grandchildren, Fender and Celeste.
Prayers will be sung 8:00 p.m., Thursday, June 6, 2019 at Korban Funeral Chapel, 907 Main Street. Divine Liturgy will be celebrated at Sts. Vladimir and Olga Cathedral, 115 McGregor Street on Friday, June 7, 2019 at 10:00 a.m. with Right Reverend Msgr. Michael Buyachok officiating. Interment to follow in All Saints Cemetery.
Pallbearers will be Ihor Wenger, Jerry Sucharyna, Zenon Bulka, Dale Klein, Scott Helm and Morris Strembicki.
In lieu of flowers, donations may be made to the Alzheimer Society of Manitoba.
The family expresses their sincere thanks to doctors, nurses and staff of the Holy Family Nursing Home for their compassion and care.
Stefania was a good wife, mother, grandmother and great-grandmother and will be sadly missed by all.