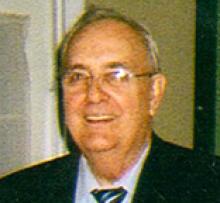 It is with deep sorrow we announce that on Monday, May 27, 2019, John fell asleep peacefully in death after a lengthy illness. John was born on May 14, 1930 in Winnipeg and was 89 years at death.
John leaves to mourn his loving wife Beverly of 21 years, his brother Allen Hope (Gloria), his daughter Lorri and family and son Greg Hope; his daughter Sherry Kirchmann (Dave) and grandchildren, Avery (Paula) and Laina Kirchmann.
John also leaves to mourn Mark Serediuk (Kyle), Tracy Zelinsky (Jessica, Owen, Elliott and Nancy), Derrick Zelinsky (Lorna, Elisa, Dan, Danica and James), Teresa Wiebe (Tom, Ariann, Joel, Richard, Larissa, Richelle and Kevin), Robert Zelinsky (Robyn, Lance, Kathryn, Chace, Falyn and Jonny), Daniel Zelinsky (Blair and Allison) and sister-in-law Carrolyn. He also leaves to mourn many grandchildren and great-grandchildren whom he loved dearly. John also had a large spiritual family of brothers and sisters whose association and visits he valued highly.
He was predeceased by his parents and three brothers, Bill, Arnold and Robert and two sisters, Phyllis and Norma, mother-in-law Nellie Kruszelnicki, brother-in-law Dennis and his previous wives, Maxine and Jann.
John was a first class power engineer and worked for numerous companies in Winnipeg, however his main focus in life and greatest joy was serving his God Jehovah and sharing his hope of a future paradise under God's heavenly kingdom.
He was also involved in many construction projects on Kingdom Halls throughout the province. This volunteer work brought him a great deal of satisfaction and joy.
As recorded at Hebrews 6:10, "For God is not unrighteousness so as to forget your work and the love you showed for his name…"
John was also an accomplished golfer and loved to get out with his friends for a game. He was a skilled photographer and very talented with computer designs and programs that enabled him to excel in his career and use his talents for numerous volunteer projects.
On behalf of the family we would like to thank the staff at Kinplace Personal Care Home for their excellent and compassionate care that was above and beyond the call of duty.
There will be a memorial service at the Kingdom Hall Complex on 227 Lakewood Boulevard on Monday, June 10, at 7:30 p.m. officiated by Robertus Berkers.