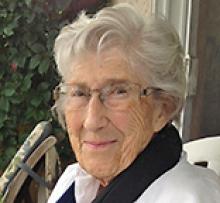 
After a long and well-lived life, Shirley Lillian Davidson peacefully passed away, June 5, 2019, at 97 and one half years young. It was only in the past few weeks did she admit to perhaps being "old".
Mom will be missed by her children: Brian, Wenda (Grant), Campbell and Michael (Jeri); five grandkids and eight great-grandkids, as well as many relatives, friends and neighbours.
Mom was born in Winnipeg, January 7, 1922, to George and Lillian Blackwell (nee Houston). They soon moved to Neepawa where she happily spent her childhood, going to school, taking piano, playing tennis and hockey, swimming, skating and skiing. She loved the family holidays at Clear Lake, in Riding Mountain National Park.
Mom attended University of Manitoba, however her studies were cut short by the war. She did her part to support the war effort by working in Ottawa as a secretary in the Armed Services control centre. After the war, and a short stint with the emerging Trans-Canada Airline (TCA) she returned to Neepawa where she married Dad, Douglas Gerrond Davidson, in 1947, just after he returned from the war and finished university.
They soon moved to Winnipeg, bought a brand new house on Montague Avenue, the perfect place for a growing family. Mom became the consummate wife and mother, as well as a "creative" cook. One of her rules was, "to try a new recipe every week". Another move to Montrose Street, as the family expanded with the arrival of son Michael.
Over the next years, Mom was involved with a wide variety of organizations and groups including the Winnipeg Symphony Orchestra, the Consumers Association of Canada, an investment club, "church circles", bridge clubs, volunteering work as a tour guide for school children at the "living prairie museum" and at the Hadashville Provincial Forestry station.
Once her own kids had "grown", Mom became a helper in the local nursery school, then took her love of nature and kids and began her work with the Manitoba Forestry Association. As Program coordinator for the MFA, she started the "Smoky Bear" reading club and delivered "Project Learning Tree" in many elementary schools. She instilled a love of conservation and the outdoors with everyone she met. Mom also had a "green thumb" and kept many plants thriving inside and outside in her garden until her death.
Sixty years ago, Mom and Dad bought a cabin at West Hawk Lake and Mom would move there every summer with kids in tow. She loved to swim and continued on with that love until she was 96 - swimming in chilly West Hawk Lake last summer. She said "lake life" was her "health insurance", which obviously paid off in spades.
Shirley was predeceased by her parents, her brother Robert Blackwell and her husband Douglas.
According to Shirley's wishes, a private service will be held later in the summer in Neepawa, Manitoba, where she will be laid to rest next to the love of her life.
In lieu of flowers, donations can be made to the Canadian Osteoporosis Society or charity of your choice.