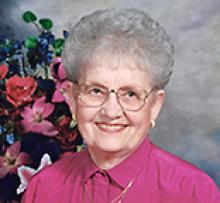 On Saturday, June 8, 2019, Alice passed away peacefully, at the age of 93, at her residence at Rest Haven Nursing Home, Steinbach, Manitoba.
She is survived by her children: Louise Fenwick (Linton Pointon), Ray (Bertha) Laing and Valerie Laing (Ed Stechly); grandchildren: Blake Laing (Helen Wiens-Laing), Taryn Fenwick Taylor (Kyle Taylor), Ted Laing and Tyrone Laing (Desiree Kroeze); great-grandchildren: Alex and Isabella, Hailey and Keanna, and sisters-in-law: Phyllis (Laing) Ireland and Marie Keith.
Alice was predeceased by her husband Ed in 2015, her siblings: Wilbert, Edwin, Delbert, (twin brother) Allan, Verly, Earl, Lillian, Pearl and Donna, and son-in-law Ron Fenwick.
Alice was born to Ivy and Robert Keith, at home on the farm in Otterburne West, Manitoba. She attended Marais Elementary School, and after completing grade 9 by correspondence, continued studying at St. Pierre Convent for high school. As a young lady, Alice began her teaching career at Ridgewood school, in 1943 to 1944, and continued at Mulvey Hill 1944 to 1945. In her first year of teaching she met a young Clearsprings farmer, Ed Laing. On November 10, 1945 Alice and Eddie were married and she became a farm wife! Alice worked on the farm and raised three children, Louise, Ray and Valerie. In her mid-40s, Alice returned to school and continued her education career as a Grade Five teacher in Elmdale Elementary School (1968 to 1978) and completed her career as Principal of Southwood School (1978 to 1988).
Alice was very active in Steinbach United Church, and in many community organizations.
After her retirement Alice and Ed travelled from the east coast to the west coast, and from the north to many of the southern United States, visiting family and friends. They also travelled to Britain to search out their ancestry roots. Alice and Ed worked diligently throughout their retirement researching and publishing two books "Pioneers of Clearsprings" and "The Great Farming Country of Otterburne West." The family farm museum was another special project of Alice and Ed. Their early retirement years also saw them spend a lot of time at the family cottage at Buffalo Point, Manitoba.
The family would like to thank Dr. Porath for her care through the years and the staff of Rest Haven Nursing Home for their care and compassion during the past two years. Also, a special thank-you to private health care provider, Kathy Penner, for her companionship over the last four years.
A Family memorial service will be held at a later date and an ash interment of both Mom and Dad will take place at Clearsprings Cemetery.
In lieu of flowers, friends are invited to make a charitable donation to Clearsprings Cemetery, 35074, Road 38 North, Blumenort, MB R0A 0C1.