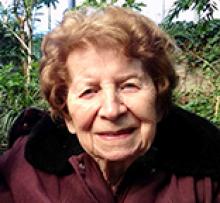 It is with great sadness that the family of Lena (Michaelina) Rivers announces her passing on Wednesday, June 5, 2019. Surrounded by loved ones, Lena peacefully departed this life.
She was predeceased by her husband Stanley and daughters, Robena Sykes and Joan Still. She will be loving remembered by her son Ronald (Camilla) Rivers and sons-in-law, Jim Still and Sean Sykes. She will also be fondly remembered by her grandchildren, Jennifer Still (Darren Bernhardt); Kevin (Lourdes) Still; Robin (Paul) Douillard; Damien (Bernice) Rivers; Tristan Rivers, Carly Naskrent; Rhiannon (Jordan) Wiebe; and her great-grandchildren, Abby, Ben, Elise, Mae and Jesiah.
Born near Riverton, Manitoba to Mary and Carl Kozuska. Lena moved to Winnipeg when just a child and lived at 163 Macfarlane Avenue in Point Douglas. She attended school until Grade 8 and then helped her mother run the boarding house as a young adult. She married Stanley Rivers in 1944. After a short sojourn in Kamloops, BC where daughter Robena was born, the family moved back to Manitoba when Stan obtained a job at the paper mill in Pine Falls. Because of lack of available housing, Lena found herself living almost a pioneer life in Lac du Bonnet. She made a home for her family renting a portion of a house where she had to haul water from the lake. Her son Ron was born at this time. Finally, two years later, the family was able to move to Pine Falls where her daughter Joan was born. The family spent many happy years in the pretty little town. With the passing of Stan in 1969, she moved her family back to Winnipeg. Lena purchased her home on 760 Dudley Avenue outright. To support her family she found work in retail and was a valued employee of Woolco, Grant Park until she retired in 1980. In this chapter of her life she raised her children in a secure, loving home, saw them mature into wonderful adults who were strongly grounded by her moral values and positive outlook on life. Her later years were spent enjoying her grandchildren and great-grandchildren.
Lena lived her life with the joy of giving - giving of her time; giving of the fruits of her green thumb; giving of her cooking and sewing skills; giving of her wisdom; but mostly giving of her love.
A Celebration of Life in her memory will be held on Tuesday, June 18, 2019 at 1:30 p.m. at Sterling Mennonite Fellowship, 1008 Dakota St., Winnipeg, Manitoba, with Terry Goertzen officiating.
In lieu of flowers, those who so desire may make a donation to a charity of their choice that is dedicated to helping the homeless, for example Siloam Mission.