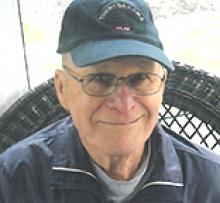 Walter passed away suddenly on Tuesday, June 4, 2019 at the Grace Hospital.
He was predeceased by his father Michael; mother Appolonia; brothers, Louis (Stella) and Michael and his sister Sabina (Bill).
He is survived by his nephew James (Joan); nieces, Susan (Bryan) and Donna; great-nephews and nieces, David (Julia), Darren (Jodi), Melanie (Chad), Paul, Sheri Lyn (Tim), Betty Anne and Jaclyn as well as seven great-great-nieces and nephews.
Walter was born September 12, 1930 at the St. Joseph Hospital in Winnipeg. He was the youngest of four siblings. Walter grew up in Fort Rouge and attended Earl Grey and Kelvin High School. He enjoyed sports and played soccer, golf, football and hockey. He played with the Dauphin Kings.
He was employed with the C.N.R. (1948 to 1951), Barkwell Paper Company and Winnipeg Transit, retiring in 1990.
As per Walter's wishes, cremation has taken place. A celebration of his life will be held at Thomson Funeral Home on Friday, June 21, 2019 at 3:00 p.m.
The family would like to thank his friend Rick Hirt (Kim) for the many years of friendship, love and support to Walter.
In lieu of flowers, kindly make a donation to Juvenile Diabetes Research Foundation of Canada, 191 Lombard Avenue, #1000, Winnipeg, Manitoba R3B 0X1 or The Children's Hospital Foundation of Manitoba, CE501-840 Sherbrook Street, Winnipeg, MB R3A 1S1.