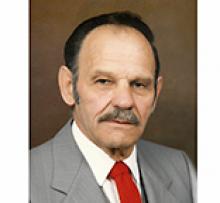 On Tuesday, June 11, 2019, at Seven Oaks Hospital, Michael Sribnyj passed away at the age of 94 years.
Michael was born in the city of Nadvirna in Ukraine. He was forced to leave his homeland and move to Germany in 1947 where he met and married his wife Luba in 1950. He then moved to Canada and resided in Winnipeg. Michael was employed at Dominion Bridge, but was later employed by the City of Winnipeg for 25 years. He retired due to illness. Michael was involved in both playing soccer and coaching at Margaret Park Community Centre and Institute Prosvita. He also "showed" his German Shepherd Dog.
He was predeceased by his wife Luba on August 4, 1990 and his son Michael on April 28, 2015.
He leaves behind to cherish his memory, his son Bohdan and daughter-in-law Linda, as well as niece Tara (Jimmy) and Cheyenne.
Prayers will be sung on June 19, 2019 at 7:30 p.m. at Korban Funeral Chapel. Divine Liturgy will be celebrated on June 20, 2019 at Korban Funeral Chapel with Right Rev. Msgr. Michael Buyachok officiating. Interment to follow at All Saints Cemetery
Flowers gratefully declined. In lieu of flowers donations may be made to the Heart & Stroke Foundation of Manitoba.