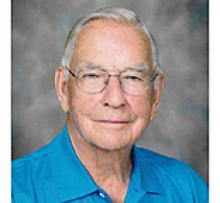 It is with sadness and fond memories that we announce the passing of Dick, aged 96, on June 15, 2019 at Holy Family Nursing Home in Winnipeg, Manitoba.
Dick is survived by his two children: son Don and daughter Brenda (Barry); seven grandchildren, Derek (Vanessa), Chris (Monika), David (Jynelle), Amanda (Paul), Nicole (Jeremy), Kyle (Amanda) and Crystal; four great-grandchildren; and his special friend, Marilyn Page.
He is also survived by three siblings: brother George and sisters, Areen and Nellie Allen, along with numerous nephews and nieces and many friends.
Dick was predeceased by his wife, Val, in 1999, his son Barry (Sandy) in 2008, and his brother Everett in 2013.
Dick was born on April 9, 1923 in Zeist, in the Netherlands to Gerrit (George) Mulder and Dirksje (Daisy) Bezemer. He grew up in East St. Paul and lived there most of his life.
Dick married Velma (Val) Lydia Stople on December 19, 1947, and they were happily married for over 50 years. They enjoyed travelling and enjoyed many visits to different countries. In 1968, they bought a cottage at Falcon Lake and enjoyed many weekends playing cards, boating, fishing, golfing, gardening, and entertaining friends. They spent many winters vacationing in Palm Springs, California.
Dick worked in market gardening in East St. Paul, eventually expanding into Portage la Prairie with his brother, Everett, and then into Carberry with Steve Kaminski and then Tony Adriaansen. Later, he and Everett expanded into heavy construction with the start-up of Mulder Bros. Ltd., and they continued to grow the company until its sale to BACM and Genstar in 1970.
In 1979 he re-entered the construction business and built Mulder Construction and Materials into a successful company until its sale in 2010.
As well, Dick spent many years involved in land development including subdivisions such as Riverdale, River Grove and Whidbey Harbour, as well as in Stonewall. He enjoyed piloting his own plane for many years.
Away from work, he spent many years serving on both the East St. Paul school boards and municipal councils. As well, he served terms as president of both the local chapter of the American Public Works Association, as well as Manitoba Heavy Construction.
He served on the boards of the Vegetable Growers Association of Manitoba, the Manitoba Vegetable Producers Marketing Board, Gardeners Sales and the Manitoba Vegetable Marketing Commission.
He ran unsuccessfully in the 1962 Provincial election for the PC party.
He has been a member of John Black United Church for well over 50 years. He was also a long-time member with the Rotary Club of Winnipeg, Elmhurst Golf and Country Club, the Wellness Institute, and Western Canada Roadbuilders. He was also involved in the initial development of the Asessippi Ski Area and Resort.
A memorial service will be held on Friday, June 21, 2019 at 10:00 a.m. at Glen Eden Funeral Home, 4477 Main St., West St. Paul.
In lieu of sending flowers, the family requests memorial donations be made to the John Black Foundation or a charity of your choice in Dick's name.