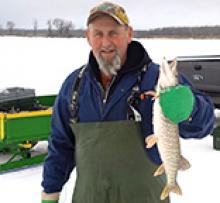 It is with heavy hearts that we announce the sudden passing of Arnold Hughes Crozier, aged 73, of Ste. Rose du Lac, Manitoba, on Thursday, June 6, 2019.
Arnold is survived by his wife Karen, daughter Kristi (Garret), grandchildren, Aislinn and Caellum; as well as his many brothers and sisters, in-laws, nieces, nephews, cousins, friends and neighbours. Arnold was preceded in death by his son Tyler.
Arnold was born on December 22, 1945 in Ste. Rose du Lac, Manitoba. As a child, he lived on the homestead in Million, Manitoba with his grandparents, parents and 11 brothers and sisters. In 1969, Arnold relocated to Gillam in Northern Manitoba. Arnold met his wife of 44 years, Karen, in Gillam in 1973. They were married in 1975. Arnold was a hard worker and took great pride in the jobs he held in Gillam as a Carman and Engine Watchman with CN Railway, and as a Heavy Equipment Operator for Manitoba Highways before retiring to Ste. Rose du Lac in 2001 with his wife.
Arnold was an avid outdoorsman. He loved nothing more than to spend time outside; whether it was exploring, picking wildflowers, foraging for berries, plants and mushrooms; hunting, snowmobiling, quadding, or fishing. Arnold learned the art of commercial fishing from his granddad on Lake Dauphin when he was only eight years old. This became one of his passions, and he continued commercial fishing up north on the Nelson River, and into his retirement on Lake Manitoba. He was awarded a Long Service Fisher Award in 2009 by the Province of Manitoba in recognition of 50 years of Commercial Fishing on various bodies of water in Manitoba.
Those who knew Arnold, know that one of his hobbies was puttering around his workshop with his tools, fixing small motors, welding, building ice shacks or trailers, and creating various inventions with his wood or metal work. He could never sit still and was always working on something.
Arnold was loved and will be greatly missed. He left an impression on everyone he met and had a funny story to tell for every occasion. He enjoyed going for out for coffee, sometimes multiple times a day, and socializing.
A celebration of Arnold's life will be held on Saturday, June 29, 2019 at 2:00 p.m. in the Ste. Rose Community Centre in Ste. Rose du Lac, MB.
Flowers are gratefully declined. In honour of Arnold's memory, his love of the outdoors and the soft spot he had in his heart for all children,; donations may be made to the Wildlife Haven Rehabilitation Centre (www.wildlifehaven.ca) or to the Dream Factory (www.dreamfactory.ca).
The family wishes to extend a sincere thank you to the staff at the Ste. Rose Hospital, Dauphin Hospital and Health Sciences Centre SICU for their compassion and care during this difficult time.

"Be who you are and say how you feel, because those who mind don't matter, and those who matter don't mind." Dr. Seuss