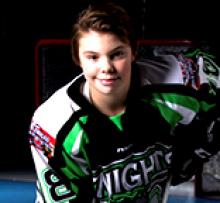 
On Sunday, June 16, 2019, our lives were changed forever when we lost Cameron our son, grandson, brother, nephew, cousin, friend, teammate and role model.
Cherishing his memory will be his parents, Chris and Tamara, sister Taylor, great-grandmothers, Alfhild Johnson and Pat Chapdeleine, grandparents, Barry and
Lorraine Nagam, Glen and Angela Johnson, Aunty Julie Nagam and Uncle Travis, Aunty Sally Nagam, Uncle Steve Johnson and Aunty Catherine, and cousins, Nahanni, Morea,
Hannah and Carter along with countless friends, extended family and an entire
community who will feel the impact of this loss.
Cameron was born on March 10, 2004 and upon first glance at this little baby, there was definitely no doubt that this was CJ's son. A cute toothless baby's laugh developed into a cheerful bright smile and finally into that
signature Cheshire grin so closely resembling his Dad that once flashed would absolutely lighten up the room. As Cameron grew, we started to gain insight into what his boyhood passions would be - sports and power
machines. The love of sports was started with hockey and copious numbers of ministicks games in the basement that then evolved to taking it outdoors onto the ice. Cameron picked up the sport of hockey incredibly quickly and it wasn't too long until he started skating backwards faster than his Dad and uncles could go forward that we realized we had a real natural athlete in the family. Over the years, Cam played on progressively more competitive teams and most recently was a member of the Eastman AA Northern Knights. This past season saw the Knights win their league championship in a thrilling come from behind overtime win in which Cam fittingly scored the first goal to begin the comeback. What a wonderful memory for everyone, especially Cam's teammates who shared this victory with him. In the spring, attention turned to ball hockey and baseball. The boys enjoyed a lot of success in ball
hockey with a league championship in 2016 that paved the way for a memorable trip out west to Vancouver. Cam's natural capability was also keenly demonstrated in the game of baseball where he had the opportunity to showcase his talent with many spectacular plays in the field. Cam definitely wasn't afraid to get dirty, as it was a personal
challenge to not let one ball get past him.
Summers were all about spending time at the lakes in Lac du Bonnet and Okimaw with family. It was also the time for Cameron to develop his love of driving all things
automated. This ran the gamut ranging from dirtbikes to quads to sea doo's to lawn-mowers. Cameron was definitely one of the youngest we've ever seen operate a bobcat with amazing precision. Time at the lake
presented the opportunity to cultivate
relationships with his cousins. Within these experiences, we began to bear witness to
Cam's beautiful personality. For a boy, he
exhibited a unique sense of kindness, caring and compassion. With this observation, there was now no doubt that he was TJ's son. Cam's gentle demeanour and playful personality made him such a loveable human being. It also translated into him being an awesome role model for his sister Taylor, younger
cousins and children who looked up to him. The combination of all of these qualities instilled a deep source of pride for his
parents who regularly received compliments on Cameron's kind-heartedness and
respectful behaviour. Chris and Tamara were so very proud of their son and ensured that he knew this too.
The passing of such a young person with his life ahead of him undoubtedly leaves us all with an overwhelming degree of sadness and hurt in our hearts, but with the love of such a strong, affectionate family and an
unlimited amount of wonderful friends and supportive rural community, we will get through this and over time the memories of that beautiful amazing boy will shift from
initiating profound sadness to instead leaving us full of happiness where we will all be wearing that signature Cheshire grin on our faces.
A celebration of Cam's life will be held on Monday, June 24, 2019 at 1:00 p.m. at Oakbank Baptist Church, 26033 Springfield Road, Oakbank, MB.

Condolence may be left at seasonsfunerals.ca