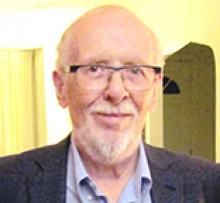 David John McDowell of Winnipeg, died peacefully at St. Boniface Hospital on June 18, 2019, with his family and friends by his side.
Dave was the only son of Herbert Watson McDowell and Dorothy Flora (nee Webb) McDowell and is survived by his wife Linda (Moore); his two sisters, Eleanor Tilton (Bob) and Barbara Evans (Gary) and Linda's sister, Vicki Smith (Ken) of Hamiota.
Born in Brandon on September 17, 1938, Dave grew up on a farm, attending South Brandon and Little Souris schools for Grades 1 to 9 and moving to Brandon to attend Brandon Collegiate. He was involved with First Baptist Church and was a Scout leader for several years.
David was a lifelong student and teacher. A one-year course at Brandon College prepared him to start teaching at a Grade 1 to 9 school at Moore Park. This experience, and later years teaching elementary classes in the Brandon School Division, led him back to Brandon College for his Bachelor of Arts degree, 1967. There he met John Tyman and his time as both student, and researcher for Prof. Tyman's book, By Section, Township and Range: Studies in Prairie Settlement, made him the enthusiastic teacher and researcher of Manitoba geography and history that we knew.
In 1964 he married Linda Moore of Elkhorn, a fellow teacher in the Brandon schools. Their two teaching careers have complemented and supported each other through the years. A move to Winnipeg to teach in schools such as Westwood and John Taylor, also gave him the opportunity to return to university for MA/MEd studies and to work with various education projects. After retirement Dave enjoyed teaching at the University of Winnipeg Education Faculty for several years.
Dave was an enthusiastic supporter and, sometime leader, of the Manitoba Social Science Teachers' Association, the Manitoba Historical Society, Dalnavert Restoration, Centennial Farms project, Heritage Winnipeg, and the ongoing restoration of Streetcar #356. He also served as Manitoba's representative to Heritage Canada's board and served on the board of the Manitoba Museum. He edited the Social Science Teachers' journal and co-authored Trailblazers: The Lives and Times of Michael Ewanchuk and Muriel (Smith) Ewanchuk with Dr. John Lehr.
David received the 1992 Medal Commemorating the 125th anniversary of Confederation, the 2008 Preservation Award for Excellence from Heritage Winnipeg and a Leadership Award in Social Studies Education from his peers, as well as the John Welsted Award for Service to Geography in the Western Interior.
Cremation has taken place. Friends and colleagues are invited to join the family for coffee and the sharing of stories on July 10, 2:00 p.m. to 4:00 p.m. at Thomson "In the Park" Funeral Home and Cemetery.
Anyone wishing to make a donation in David's memory may give to Heritage Winnipeg's Streetcar #356 project (Heritage Winnipeg, 509-63 Albert Street, Winnipeg, MB R3B 1G4), The Manitoba Historical Society, (710A, 1 Lombard Ave., Winnipeg, MB R3B 0X3), or to the charity of their choice.
The family wishes to thank the Winnipeg Fire Paramedic Service and the staff of St. Boniface I.C.U. for their kindness and professionalism.