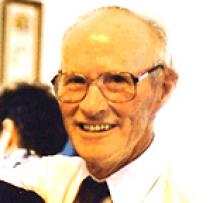 Lawrence King passed away peacefully on May 24, 2019 at the Rosewood Lodge Care Home in Stonewall, MB.
He was predeceased by sisters, Mary, Evelyn, Ruth, Emma, Helen, Dorothy and brothers, Fred, George and Harry. He is survived by his twin sister Audrey, wife Jean, daughter Alison, and numerous nieces and nephews.
Raised in Clarkleigh, MB, Lawrence worked in Winnipeg after the sale of the family farm. He was a city bus driver when he married Jean Vivian and had a daughter, Alison. An avid outdoorsman, Lawrence landed his dream job as manager of the East Meadow Ranch Goose Sanctuary in Clarkleigh in 1964, a job he held for 49 years during which time he received the Manitoba Premier's Award and the Governor General of Canada Medal for his contributions to wildlife conservancy. He was also a skilled carpenter and built the landmark Lundar Goose statue in 1976. He invented humane traps and later became adept at wildlife photography. Failing health forced him to retire in 2013 at the age of 86.
Many thanks to the home care staff in Lundar and nurses at Rosewood Lodge for their personal attention and excellent care.
A memorial service will be held on Saturday, July 6, 2019 at 2:00 p.m. at the Lundar Legion Hall with Cindy Thorkelson officiating. Interment will follow in the Clarkleigh Cemetery.
If friends so desire, donations may be made in Lawrence's memory to the Clarkleigh United Church, P.O. Box 214, Lundar, MB R0C 1Y0.