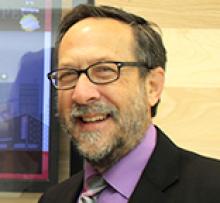 Sherman Lewis Kreiner, 66, passed away on July 1, 2019 at the Health Sciences Centre in Winnipeg, Manitoba.
Sherman was born on March 25, 1953 to Melvin and Rhoda Kreiner in Philadelphia, PA, USA. In 1974 he married Cindy Coker, who he met at Swarthmore College. Together they raised two children, Corey Coker and Meta Kreiner. Following a law degree from the University of Pennsylvania, Sherman worked tirelessly for democracy and social justice through PACE, the Crocus Investment Fund, the University of Winnipeg Community Renewal Corporation (UWCRC), Sholem Aleichem Community, and numerous volunteer organizations.
Sherman was an intelligent, thoughtful, kind, curious, witty and courageous human being who thought carefully about the work and life he wanted to create and live with Cindy. Together, they worked to make their shared vision for a better world a reality each and every day. He also was a "Phanatic" in the greatest sense of his beloved Philadelphia sports teams.
Sherman's sister, Debbie Stevens (nee Kreiner) was an amazing support to him through his battle with leukaemia and gave him the gift of an extra year through a stem cell donation.
Sherman is survived by his parents, sister, brother-in-law Scott Stevens, son-in-law Sophan Chhin, grandchildren, Soveren Chhin-Kreiner and Solas Chhin-Kreiner, daughter-in-law Ashlee Coker (nee Kneeshaw), and his brother and sisters-in-law, nieces, nephews, grandnieces and grandnephews.
Sherman was predeceased by his sister, Anna Kreiner.
A private funeral will be held, followed by sitting Shiva (family visitation) July 6 to July 8 2019 at 1532 Mathers Bay W., Winnipeg, between 6:00 p.m. and 9:00 p.m.
In lieu of flowers, donations can be made to a social justice organization of your choice.