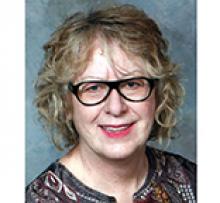 It is with great sadness that we announce the passing of artist and curator Olya Marko on June 27, 2019, after a brief battle with cancer.
Olya was predeceased by her parents, Steve and Anela Marko and her niece Rieja Leclerc. She leaves heartbroken, her beloved husband Bohdan Zajac, her sister Yaroslava Leclerc, her brother Michael Marko (Indira) and their children, Madison and Stefan, and her fur-babies, cats, Gracie and Greg.
Olya's parents were from Western Ukraine and after the Second World War found refuge in Great Britain, where Olya was conceived. They came to Canada soon after and Olya was born in Point Douglas, Winnipeg on October 21, 1952. Point Douglas was instrumental in Olya's early development; its Ukrainian churches, schools, dance ensembles, choirs and youth organizations impacted her deeply. She also excelled in sports, particularly basketball at Aberdeen Junior High, where they won a city championship.
Olya graduated from the University of Manitoba with a Bachelor of Science degree (Computer Science). It was there that she met the love of her life, Bohdan. They were married November 27, 1976. Bohdan and Olya shared a passion for travel and travelled throughout Canada, the United States, Mexico, Britain, Europe and Ukraine. In particular "the City of Lights" - Paris - was Olya's favourite place, where she could surround herself with the art she so loved. Olya went back to university and received a Bachelor of Fine Arts degree. This combination of science and arts degrees was an alchemical mix.
Olya was an enormously expressive artist who worked in many media, including wood, oil, acrylic, film, steel and pastels. Her degree in computer science allowed her to be one of the first artists in Manitoba to integrate her computer into art; 'Hello CorelDraw' her favourite software. Olya had exhibitions in Ukraine (Kyiv, Lviv, Ternopil), Yugoslavia (Novi Sad), USA (Minneapolis) and Canada (Toronto, Winnipeg, Saskatoon). She also curated shows at the Ukrainian National Art Gallery in Kyiv. She did research for Dr. Robert Klymasz, which was used in the creation of exhibitions and publications at the Canadian Museum of Civilization in Ottawa, most notably "Art and Ethnicity".
She was the Curator of Art at the Ukrainian Cultural and Educational Centre (Oseredok) in Winnipeg from 1984 to 1992 and oversaw hundreds of shows. She curated a show every month, featuring rising Ukrainian-Canadian artists such as Jeanette Shewchuk, Natalka Husar, Aganetha Dyck, Michael Boss, Diane Thorneycroft and Bill Pura as well as established artists like Leo Mol and William Kurelek. Her main emphasis was on contemporary Ukrainian Canadian artists, and women in particular. One of Olya's most notable exhibitions called "Synergos" featured Manitobans of Ukrainian descent. It was shown in Winnipeg, Lviv and Kyiv. Another notable show was a co-production with the Winnipeg Art Gallery called "The Spirit of Ukraine".
Olya's absence will be felt by all her dear friends, many on Facebook. This was Olya's pulpit and she lit up the pages. She was bold, brazen, irreverent, funny, witty and always told the truth, no matter how painful. Nothing was taboo for her razor-sharp mind.
Olya was an original with a beautiful soul and a huge heart. She was compassionate, kind and generous. She loved fashion and in particular her wildly original Fluevog shoes. Her life was a work of art in every respect, her eye always focused on form, colour and detail. Olya brought beauty to the world. She will be missed. Gone but not forgotten.
The family would like to thank family physician Dr. Sarah Kredentser for her excellent care over several decades.
As per Olya's wishes, cremation has taken place. A Celebration of Life will be held at a later date.