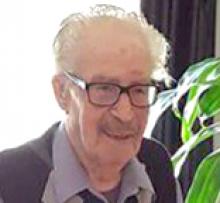 Quietly on June 21, 2019, Harvey Oswald Nerbas of Winnipeg slipped into that good night.
Born February 25, 1930 in MacNutt, Saskatchewan and raised in Dropmore, Manitoba, where he was affectionately known by his many nephews as Uncle H. O., Harvey moved to Winnipeg in the late 1940s where he found employment with Dominion Bridge. Harvey served as a streetcar operator and later a bus driver with Winnipeg Transit from 1954 to 1977 before pursuing a career in real estate. Shy of idleness, Harvey fulfilled his dream of being his own boss, spending his retirement as a jack-of-all-trades.
Harvey attracted friends easily with his good humour and had a knack of rocking even the most colicky baby to sleep. An active member of St. James Lutheran Church, his lifelong mantra was, "I like to help people". A canasta shark with a soft spot for animals and puttering, Harvey also knew his way around a dance floor. At parties and socials, there was often a lineup of ladies waiting their turn to dance with him.
The eighth of nine sons, Harvey is predeceased by his brothers and his second wife, Shirley. Harvey is survived by his three daughters, Kathryn, Brenda and Sherry, eight grandchildren, thirteen great-grandchildren, his three stepchildren, Debbie, Cathy and Tim, and four stepgrandchildren.
A funeral service will be held at Chapel Lawn Funeral Home, 4000 Portage Avenue on Monday, July 8, 2019 at 2:00 p.m.