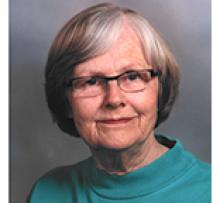 
On Friday, June 28, 2019, Marion Elizabeth (Betty) Daniels passed away at the age of 91. Betty was a loving mother and wife, and always sought to bring joy to everyone she met and befriended.
Betty was born on April 24, 1928 in Cambridge, New Brunswick to Gordon and Marion Robinson (nee Dykeman). She was joined some seven years later in the family by her brother James (Uncle Jimmy), with whom she was always close. They spent their early years in Cambridge helping their dad in his General Store. Betty's early education began in the local one-room school. She went to high school in Fredericton, where she lived with her beloved Aunt Glad and Uncle Gordon Dykeman.
After completing high school, Betty went to the University of New Brunswick (UNB) and graduated with a Bachelor of Science in 1948. There were nine women in that graduating class, many of whom Betty stayed in close touch with for many years. UNB, or "Up the Hill" as it was known in her time there, remained important to her all her life.
Betty married James Daniels on February 14, 1950. Jim and Betty first lived in Kingston, where their oldest Susan was born, and then Hamilton and Madock, ON, and Fredericton, NB. They settled in Winnipeg in 1956, where they had their other four children, twins, Richard and Robin, Michele, and Charles.
Betty and Jim created a strong network of friends in River Heights and the cottage in Farlane, ON. Though not easy to access, Cache Lake was an easy home in the summers, filled with blueberry-picking, swimming, visiting, the occasional gin and tonic and baking bread in 30-degree heat on the wood stove.
Betty received her RN designation after moving to Manitoba, but never practised. Instead, she made many people happy with a 20+ year career in the china and silverware department at Eaton's Polo Park. Betty made many longstanding friendships with her fellow Eatonians.
Making others smile was central to Betty. She was a quick wit, often poking fun at herself, and was always interested in asking questions of others. She genuinely cared about the people she met.
Betty loved animals and nature. She cared deeply about her pets, and there were many cats over the years to sit by her side (Saba, Kit Kit, Safi and Kofi).
Betty and Jim enjoyed many trips together to the Caribbean, resulting in some very funny and wonderful tales. Betty also started taking tours with the Winnipeg Art Gallery in her later years, in an effort to keep discovering the world.
Betty was predeceased by her loving husband, her parents and her close relative Gordon Dykeman (Uncle Gordon!).
Left to cherish her memory are Betty's five children and their partners: Susan (Clarence), Robin (Rick), Richard (Judith), Michele and Charles; Erin Daniels was like a daughter; Uncle Jimmy (Gerrie); Robina Weatherly (Aunty Bobbi!) and her very close friend of 80 years, Mary Holmes (Aunty Mary!).
Betty's laugh will be missed and remembered by all who love her. We all hope to carry forward her caring and her joy.
Thank you to everyone who looked after Betty, including the staff at The Shaftesbury, Sydney Fingold, Oakview Place, and very importantly Golden West Centennial Lodge. You were amazing.
To honour Betty, in lieu of flowers, donations may be made in her name to the Winnipeg Humane Society or the Salvation Army.
A celebration of Betty's life with family will take place in the late summer or early fall of 2019.