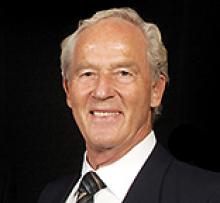 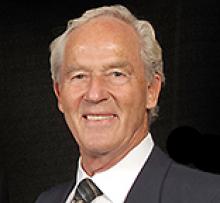 Quietly and peacefully, with his wife Mary Lou by his side, Paul Albrechtsen slipped away in the early hours of Sunday, July 7, 2019.
Paul was born in Odense, on the island of Fyn, Denmark (just steps away from Hans Christian Andersens' house) on October 14, 1930. He was the firstborn of Hans Fredrick and Andrea Albrechtsen. Soon after, the family moved to the village of Haagerup where his siblings, Anny, John, Owen and Kirsten were born.
He showed remarkable entrepreneurial skills growing up by raising rabbits for meat during the war when Denmark was an occupied country and meat was scarce. After the war he bought old motorcycles, refurbished them and sold them to the vehicle starved Danes, all while going to school and learning a trade.
After his apprenticeship as a diesel mechanic, Paul completed his compulsory army service and decided he should see more of the world so in 1954, he left for Canada on a lifetime adventure. The waiting period for immigration to the U.S. was lengthy but Central Canada was not, so in February, 1954 he arrived in Halifax and headed west. It was a bitter cold train ride to Winnipeg and when he arrived, he discovered the closest job available for a mechanic was in Virden, Manitoba.
While working in Virden, an oil company executive who had been inspecting the rigs accidentally cut a hole in the radiator of his truck. Parts were only available in Toronto and he was in a hurry to leave, so Paul sent him for coffee, repaired the radiator adequately for him to continue his trip and sent him on his way. He offered Paul a job on the spot.
Water was needed for the drilling rigs, so Paul bought a truck and hauled water in addition to his regular job. In order to manage his time effectively, he slept in his tool shack so he could take care of the rigs, haul water and still fix trucks.
Paul met and married his first wife, Peggy (Margaret) Anderson in 1956. They had four children, John Erik, Leanne, Christopher and Robert. By then, he had established Paul's Hauling and the family moved from Brandon to Winnipeg where he continued to expand his business interests. Paul bought many trucking companies throughout the years but his flagship was always Paul's Hauling; it was the foundation of his business ventures.
In 1981, Paul married Mary Lou Ranson and they had two sons, Scott and David.
In the late 1980s and early 1990s, Paul decided he would like to give back to the community that had given so much to him. His first major donation was to the Reh-Fit Centre where he had been a member for years and where he had been resuscitated after a serious cardiac incident.
He subsequently went on to support a number of health related causes and organizations that were close to his heart. The Winnipeg Humane Society, CancerCare Manitoba, Fort Whyte Centre, Health Sciences Centre Foundation and Assiniboine Park have all received major donations from his Foundation and also St. Paul's High School where four of his boys attended school. Paul liked St. Paul's motto "Men for Others"; he thought it was fitting.
Paul thoroughly enjoyed seeing the benefits of his generosity and liked to say "he wanted to give with a warm hand rather than a cold one". He kept all his letters of thanks and appreciation, even those from the school children visiting Fort Whyte Centre.
Paul prided himself as a "people person"; he loved to talk to anyone interesting from all walks of life and he had a great sense of humour including the ability to laugh at himself. He leaves behind an enormous circle of family and friends that will miss his presence immensely.
He was predeceased by his father Hans Fredrick, first wife Peggy, mother Andrea and brother Owen. He is survived by his loving wife Mary Lou; son John Erik, wife Cheryl (Jessica; fiancé Matt, Jaclyn and James); daughter Leanne, husband Dan Granger (Justin); son Christopher, wife Joanne (Mitchell and Evan); son Robert, wife Darcia (Jaida and Anika); son Scott, wife Clare (Clark) and son David (girlfriend Alycia); his siblings, Anny, John, Kirsten and their families, as well as Mary Lou's Ranson siblings, David, Rick, Joanne, Rob, Mark and their families.
The family wish to express their heartfelt gratitude to Dr. Beth Abramson for her extraordinary care and support in helping us navigate through this very difficult time. Paul was so thankful for her constant concern.
In lieu of flowers, please consider a donation to either the Reh-Fit Centre, the Winnipeg Humane Society, or the St. Boniface Hospital - Paul Albrechtsen Cardiac Research Fund.
A Celebration of Life will take place on Wednesday, July 17, 2019 at 2:00 p.m. at the RBC Convention Centre.


Peacefully at home, Paul passed away in the early morning hours of Sunday, July 7, 2019 with his wife Mary Lou by his side.
Paul is survived by his wife, his six children and their families.
A Celebration of Life will take place on Wednesday, July 17, 2019 at 2:00 p.m. at the RBC Convention Centre.
A longer obituary will appear in Saturday's edition.