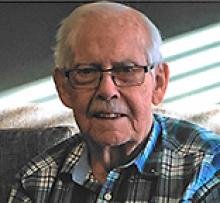 
It is with saddened hearts that our family bids farewell to our dad, husband, guide, mentor and friend.
Donald Sinclair Rae was born to Ethel Harriet and Neil Gordon Rae of Winnipeg on April 2, 1929. He grew up as the youngest in a very lively St. Vital home under the influence and protection of his parents and six older siblings.
He was active as a youth in school, scouting and Regents Park United Church where Don met many of his lifelong friends during choir practices and youth events. It is also where Don met and eventually wed the love of his life, Josephine Houston, on September 17, 1955.
Donald graduated high school from Norwood Collegiate, and followed his father, brothers and many friends into the trades, earning his journeyman papers as a carpenter, working for Claydon Construction Ltd. Through a lifetime of additional training, he shifted his career towards project management and project oversight. His work created many of the Winnipeg landmarks that dot the city skyline to this day.
Dad was introduced to Star Lake while visiting his sister Margaret and husband who owned and operated Star Lake Lodge. He and several friends built the family island cabin in their late teens, that became the anchor to his family's lives and memories. Donald loved to open the cabin and his home with others including extended family, cherished neighbours and friends.
Donald and his family thrived in a tight-knit and close group of neighbours from Farwell Bay who were instrumental in establishing, building and attending Donnelly United Church. As an adult he was also an active Mason, participating in several lodges, orders and youth groups with his children.
Dad passed peacefully at the Tuxedo Villa Extendicare with his wife and youngest daughter at his side at the age of 90.
He is predeceased by his parents and his brothers, Allan, Jerry, Walter, Jack and his sister Margaret. He is survived by his elder sister Barbara. His passing is mourned by his wife Josephine, his children, Patti (Jeff), Andrew and Nancy (Bob). He will be dearly missed by his grandchildren, Aislinn, Abbie (Brad), Quinn, Matthew, Lindsay and Madison (Brian). His passing will also be felt by many extended family members, neighbours and friends.
A private family graveside interment will be held, and a celebration of Donald's life will be at 10:00 a.m. on Wednesday, July 17, 2019 at Chapel Lawn Funeral Home, 4000 Portage Avenue. The format of the celebration is open and informal, allowing all who knew Don to share their memories and stories.
The family has requested in lieu of flowers that memorial gifts may be made to the Alzheimer Society of Manitoba or Masons Care Manitoba.