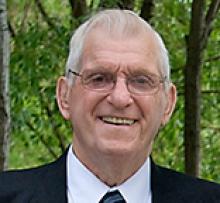 
Respecting his wishes, cremation has taken place and an interment service will be held at Brookside Cemetery with date and time to follow.