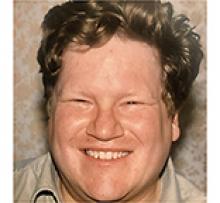 
On July 15, 2019 at the Grace Hospital, Paul Ernest Johnson passed away after a stroke on April 1.
He is survived by his wife of 23 years, Cynthia Johnson (Saiko), mother Louise Johnson (Tetlock), brother Bruce Johnson and wife Theresa (Pellegrin) and niece Rebecca Fernandes (Johnson) and husband Paulo, sister Pamela Tetlock (Johnson) and husband Goldie and niece Carmen and nephew Victor, brother Craig Johnson and wife Brenda (Krashel) and niece Hannah and nephews, Jaden and Reese. Paul was predeceased by his father Ernest Johnson.
Paul was born in Winnipeg on September 25, 1956 and was the first born son of Louise and Ernie. Paul enjoyed lots of one on one time with Mom and Dad. He was the joy of their lives. He was joined in subsequent years by two brothers and a sister. He was a loving, excellent big brother to them all.
Paul attended elementary school at La Verendrye, junior high at Earl Grey and Kelvin High School. Paul had many interests and activities in his life, many of which he was very good at. He was a Cub and a Boy Scout in the St. George's troops. He took swimming and piano lessons and played soccer when he was little. Paul was a talented artist. As a teenager he meticulously constructed models of the Second World War planes and tanks, painting them to match the originals right down to tiny insignia on the uniforms.
Paul's interest in the military grew and in the summer of 1974 after graduating high school, he trained with the Canadian militia in Wainwright, Alberta. As a member of the Queens Own Cameron Highlanders reserve, he learned to shoot mortars and participated in military tattoos.
Later at the University of Manitoba Paul studied music, majoring in voice and organ. He graduated with a music and education degree. While at university Paul was a proud member of St. John's College and participated in student politics.
Paul was an accomplished singer and a member of many choirs over the years, starting as a choir boy at St. Luke's then St. George's Crescentwood with Stewart Thomson. In high school Paul participated in choir and sang in musical productions of Brigadoon, No No Nanette, and My Fair Lady, which he also later performed with Rainbow Stage. As a young adult Paul was tenor soloist for St. John's Cathedral and later The First Church of Christ Scientist. Paul also sang in other choirs including the Winnipeg Singers, the Bass Clef/ Better Half, Brochan Lom and most recently in All the King's Men since 2007 until this year. Paul toured England with All the King's Men in the summer of 2008 singing in the Cathedrals of Norwich and Southwark.
Paul started his working life driving truck for BFI. After many years of being a professional driver Paul began his teaching career. He was a part time music teacher at Glenwood School in St. Vital School Division and later as a band teacher in British Columbia. When Paul returned to Winnipeg he became the verger of St. George's Crescentwood. He took pride in taking care of the building, particularly the polishing of floors and wood work. Paul also took time for the people of St. George's. Nothing was ever too much trouble. He was a friendly face and a kind heart.
Paul had an incredible memory. He had a mind for facts and trivia second to none. When the family played games we knew Paul's team would always win. Paul had a map in his head and never got lost. Paul was even short listed to appear on Canada's Smartest Person.
A positive result of Paul's first marriage, he became a Dad to a wonderful stepson Jeffrey whom he helped to raise and love. Living in Saanichton, BC at the time, he enjoyed tending horses along with his own horse Clabby.
Paul leaves behind his beloved wife of 23 years, Cynthia. Their love was plain to see as they enjoyed many aspects of life together including her many visits to the hospital in the last days.
Paul and Cynthia enjoyed travelling together, whether it was just a quick jaunt to Thief River Falls for some shopping or a cruise to Cuba. Time away was very much enjoyed.
Paul and Cynthia were longtime members of the Gilbert and Sullivan Society and participated in many wonderful stage productions including The Gondoliers, HMS Pinafore, The Pirates of Penzance and The Mikado.
Paul loved watching sports and together with his wife, were season ticket holders of both Goldeyes baseball and Moose hockey. He also enjoyed watching games on TV. His favourite teams included the Baltimore Orioles, the Pittsburgh Penguins and his beloved Green Bay Packers.
Paul was a very generous person. Starting with his family and friends and extending to his community and beyond. One of his favourite causes was animal welfare. He and his wife Cynthia rescued four dogs, three welsh terriers (Milo, Carmen and Rowdy) and a greyhound (Dani). Paul and Cynthia participated in fundraisers such as Paws in Motion and the Bow Wow Ball.
In his final months, he was tirelessly and well cared for by his loving brother Bruce. Paul will be greatly missed by all.
We thank the staff on the third floor south of the Grace Hospital for their care.
A Celebration of Life will be held Tuesday, July 23 at St. George's Crescentwood, 168 Wilton Street, 1:00 p.m., reception to follow.
In lieu of flowers, donations can be made to the Winnipeg Humane Society.
Publish Date: Jul 20, 2019


On July 15, 2019 at the Grace Hospital, Paul Ernest Johnson passed away.
A Celebration of Life will be held Tuesday, July 23 at St. George's Anglican Church (Crescentwood), 168 Wilton Street, 1:00 p.m., reception to follow.
In lieu of flowers, donations can be made to the Winnipeg Humane Society.
Full obituary to follow in Saturday's Free Press.
Publish Date: Jul 17, 2019