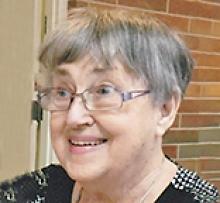 It's with heavy hearts that we announce the passing of our Mother, Fern Dow on July 11, 2019 at the age of 82, with family by her side at her home in McClure Place. Mom was predeceased by husband Richard (Dick) Alvin Dow.
Fern is survived by children, Cindy (Kevin), Kim (Craig), Kelvin (Janet), Debra (Gilbert) and Shelley (Henry); grandchildren, Sarah (Chris), Stacey (Eric), Clinton, Terra (David), Tamara (Francesco), Zachary, Alexis (Jennifer) and Nicole (Paul); and great-grandchildren, Lilah, Josie, Brooke, Liam, Bailey, Tayden, Damien, Sophie, Savannah, Nikolai, Hailey, Carter, Andrew and Christine. Mom also leaves behind brothers, Lance (Anita) and Bruce (Debbie) and sister Doreen (Dalton); as well as many nieces and nephews.
Mom is predeceased by her parents, Francis and Ethel Allan; parents-in-law, Alex and Lily Dow; sister Betty; brother-in-law Alvin; son-in-law Jim; grandchildren, A.J. and Alexandra; as well as Dad's sisters, Beth (Durwood), Irene, Ollie (Don) and Isabelle (Amie).
Mom was born on December 25, 1936 in Portage la Prairie, Manitoba. She married Dick Dow on October 26, 1955. They were blessed with five children between 1957 and 1965. Mom worked at the Tribune newspaper, Highlander arena and the old Winnipeg arena. Her most important job was raising five children.
Mom enjoyed camping and fishing. Mom and Dad spent many enjoyable summers camping at Lynch's Point with their children and many family members. Mom and Dad also loved to attend the Harness Races.
Mom loved living at McClure Place where she enjoyed meeting many neighbours who became good friends, played bingo, cards and recently started yoga.
The family would like to thank the Dialysis Units at the HSC and Sherbrook locations for the wonderful care provided to Mom during her treatments and the home care program.
A memorial service will be held at 11:00 a.m. on July 26, 2019, at McClure United Church, 533 Greenwood Place.
Friends and relatives are encouraged to share in a photo-tribute, stories and condolences for the family by visiting Fern's memorial page at IntegrityFuneralPlanning.com
In lieu of flowers, donations in memory of Mom can be made to: the Dialysis Units of the HSC, 820 Sherbrook Street, Winnipeg, MB R3A 1R9, or charity of your choice.