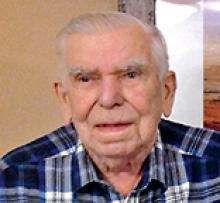 Gentleman, storyteller and provider of smarties to grand and great-grandchildren, Iver Jensen Grimstrup passed away on July 17, 2019 after a battle with cancer. He was loved by many and will be greatly missed by us all.
Born in No, Denmark on April 15, 1931, Iver was very athletic and competed in many school gymnastic competitions. He worked as a farm labourer after graduation until he was called up for National Service. Upon release from the Danish Army he married Lis Ruth Jacobsen and returned to farm work. In 1957, Iver, Lis, and their three young children immigrated to Canada, settling on a farm near Morris, MB. After several years on the farm, the family moved to Winnipeg in 1962 and Iver worked as a construction labourer, and part-time janitor with the Hudson's Bay Company, a position he held until 1975. Joining the University of Manitoba as a night janitor in 1963, he earned a place as a carpenter's apprentice there in 1967 and took evening courses at the Manitoba Institute of Technology. He was certified as a journeyman carpenter in April of 1969 and continued working for the university until his retirement in 1989. Iver was a very active member of the Fraternal Order of Eagles #3870 and served as a trustee for several years.
After retirement, Iver spent many happy winters in Texas, where he competed in many local billiard and shuffleboard tournaments. He was an avid golfer and enjoyed many trips to places such as Hawaii, Jamaica, and back to Denmark. He continued to be a very active member of the Eagles, participating in many seniors' activities and the weekly cribbage tournaments.
Iver was predeceased by son Henning, wife of 65 years, Lis, parents, Peder and Mary, and brother Kaj. He is survived by his children, Peder (Judy), Jorgen (Cheryl), Mary (Gordon), Arne (Kristin) and Carsten, seven grandchildren, ten great-grandchildren and a large extended family in Denmark.
A celebration of Iver's life will be held at the Fraternal Order of Eagles, 3459 Pembina Hwy. on Tuesday, July 23 at 12:00 p.m.
Donations in lieu of flowers may be sent to CancerCare Manitoba in the name of Iver Jensen Grimstrup.
Our heartfelt thanks to the dedicated, caring staff of Harmony Court, the home care nurses, Mary Ashcroft and the Palliative Care Team of the Winnipeg Regional Health Authority.