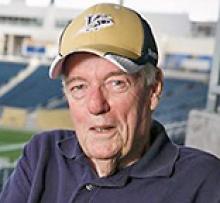 Surrounded by the love of his children and grandchildren, Don Ramage, aged 93, passed away on Thursday, July 18, 2019.
Don was predeceased by his loving wife Joyce in 2009. He is survived by his three adoring children, Derek (Demus Gonzales) of Cathedral City, CA, Donald Jr. (Cindy) and Patti (Paul Grossman) all of Winnipeg and his five grandchildren, Katie, Jack and Hayley Grossman and Derek and Cameron Ramage. Don is also survived by his brother Bill Ramage (Freda) of Burlington, ON, his sister Margaret Criddle (Percy) of Sidney, BC his sister-in-law Eileen Ramage of Medicine Hat, AB, brothers-in-law, Brian Roche of Kelowna, BC and Eric Roche (Yvonne) of Brockville, ON, niece and goddaughter Lyn Maire together with many beloved nieces and nephews and their families. Don was also predeceased by his parents, William and Gertrude Ramage, parents-in-law, Thomas and Edna Roche, brother Jack Ramage and sister Cay Crozier (Albert) as well as his dearest friends, Pat and Doug Silk.
Don was born in Winnipeg on April 13, 1926 and was raised in the West End in a loving and busy home on Banning Street. He attended Greenway, Laura Secord and Daniel McIntyre schools. He made lasting friendships on Banning Street-Allan Johnston attended birthday parties prior to their beginning school right up to celebrations for Don in his 90s. Don served his country in the Second World War, initially enlisting in the Air Force while under-age and after being discovered, joining the army as soon as he was able. As the son of a finishing carpenter turned teacher, Don was called upon to teach shop classes to students slightly younger than himself during the war years. Following the war Don apprenticed to his Uncle Fred Palmer in Welwyn Garden City, Great Britain, with the aim of taking over his uncle's construction business. This goal was short circuited when, during an extended visit back to Winnipeg he met the love of his life, Joyce Roche, while both were working at the Winnipeg Free Press. After a brief courtship, Mom and Dad married on June 7, 1950. Two sons, Derek and Donald, and a daughter Patti followed. During those early years Dad, a born salesman, worked for Carnation Milk. It was Mom and Dad's goal however to own their own business and in 1969 they purchased Empire Spice Mills. With Mom's support, Dad grew the business from a local distribution company to having a sales network extending from Ontario to British Columbia. The success of Empire served to afford a wonderful life for Mom and Dad. Dad was both pleased and proud when young Donald joined the business full time and they worked side by side until Dad retired at 90 years old. Donald's role in Empire served to provide Mom and Dad the freedom to spend many winters in Carlsbad, CA with the Ramage siblings and in later years, Pasadena and Palm Springs with Derek and Demus. Dad's favourite place in the world however was his cottage in Sandy Hook. Dad's love for the lake was firmly established as a young child when he and his siblings spent summers in Boundary Park and he was thrilled when he and Mom took over our great-grandmother's Sandy Hook cottage in the 1950s. During the summer months Dad commuted from the cottage to work every day to ensure his children, and later his grandchildren, enjoyed the same idyllic lake life he and his siblings experienced growing up. For more than 50 years Dad served as a director and president at the Sandy Hook Community Club establishing annual traditions such as Field Day, the Corn Roast and countless social events alongside friend Len Andree. He also loved his twilight golf with Doug Silk, Gordon Johnson and daughter Patti. When not at work or the lake, Dad busied himself as an active mason and member of St. Johns Lodge No. 4 (including a term as Master), Scottish Rite and was also a member of the Anglican Church. Mom and Dad forged many lifelong friendships during their years at St. Matthews, where Dad served as Rectors Warden.
Dad's loyalty to the Winnipeg Blue Bombers and the CFL was unparalleled. A season ticket holder since 1948, he missed only six Bomber games in that time and attended roughly 50 Grey Cup games, including a run of 41 consecutive championship games, most often with good friend Peter Ahoff. Just weeks ago, he attended his 72nd consecutive Bomber home opener. Dad's commitment was recognized by the Bombers in 1998 with a 50-year luncheon, in 2013 when he was asked to raise the flag at the opening of Investors Field and by the CFL in 2018 when the League Commissioner brought the Grey Cup to his home. Dad was also a passionate Jets fan and 1.0 and 2.0 season ticketholder, but his favourite hockey teams were those of grandchildren, Derek, Jack and Hayley. He never turned down an opportunity to attend their games or to spend time with his grandchildren. This meant he enthusiastically attended Katie's theatre productions and never missed a chance to support Cameron at the Movement Centre. Dad's devotion to family meant that he was an integral part of our daily lives and his passing will leave a void that we will have to fill with memories of a wonderful man who was full of life, had a keen sense of humour and who was always there for his family and friends. We were truly blessed.
Dad's funeral service will be held Thursday, July 25, 2019 at 2:00 p.m. at Neil Bardal Funeral Centre, 3030 Notre Dame (across from Brookside Cemetery).
In lieu of flowers please consider a donation to one of Dad's favourite charities: Riverview Health Centre, rhc.mb.ca, The Movement Centre of Manitoba movementcentre.ca, or a charity of your choice.