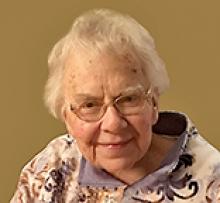 Evelyn Jean Dyker died peacefully at Lions Personal Care Centre in Winnipeg on July 26 2019, at the age of 88.
Jean was born August 19, 1930 in Waskada, to Reverend George Anderson Dyker and Lulu Dyker. She was schooled in Binscarth and Alexander, during her father's postings as United Church Minister.
Jean lived most of her adult years in Winnipeg. She was employed for 17 years as a clerk with the Province of Manitoba, followed by a longterm disability leave. She was a longtime member of Crescent Fort Rouge United Church, where in earlier years she sang in the choir and was a member of the United Church Women Circle 6-13.
For over three decades Jean lived with her mother in their Kennedy Street apartment overlooking the Legislative Building grounds. Her home for the last 25 years was the Lions Manor complex on Sherbrook Street. In her early years there, she sang in their choir. The Lions staff and residents were like family to her. Particularly special were the years of close companionship with Edward Wright, which enriched her life and brought her much joy. Jean moved from independent living at Lions Manor to its Supportive Housing program in February, 2016, and to Lions Personal Care Centre in July, 2019.
Jean had the support of many people over her lifetime: members of both her immediate and extended family, home care workers and others in her health care team, and the many helpful and kind staff of Lions Housing Centre. The caring seventh floor Supportive Housing staff, who went above and beyond in looking after her, were very dear to her. Jean received professional and compassionate end-of-life care during her brief stay at Lions Personal Care Centre. The family is deeply grateful to all in the Lions Manor family who supported and cared for Jean over the years.
Jean was predeceased by her parents, George A. (1946) and Lulu (1985); brothers and sisters-in-law: Allan; George F. (1974) and Helen (2003); Hedley (1978) and Helen (1978), Helen (1993); Lyle (1994) and Beatrice (1974), Edith (2011); Gordon (2008) and Peggy (2013); sister Margaret McFadden (2014); nephew Ross Dyker (2015); and great-niece Marcia Spiller (1993). Surviving her are her brother-in-law Donald McFadden, 13 nieces and nephews, many great-nieces and nephews as well as great-great-nieces and nephews.
Jean's funeral will be held at 11:30 a.m. July 31, 2019 at Crescent Fort Rouge United Church, 525 Wardlaw Avenue, with interment to follow at the Elmwood Cemetery.
Memorial donations may be made to Friends of Elmwood Cemetery Inc. through the Winnipeg Foundation website, https://www.mycharitytools.com/gift/wpgfdn or to a charity of your choice.