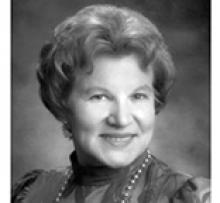 
Katherine (Kay/Aunty Kay) was born at St. Joseph's Hospital in Winnipeg, MB but was soon on the family farm at Ledwyn, MB. As their house had recently burned down, home for the first part of her life including her first winter was an uninsulated granary, with a wood stove added, until a new house was completed. She attended Tarno School, Ledwyn, completing Grade 10, and then graduated from Isaac Newton School in Winnipeg, completing Grade 12, followed by training to be a teacher at Normal School.
Kay's career included various positions over a 41-year period. She was a permit teacher at Tarno School for a year followed by a brief stint at Eaton's and then 14 years at Manitoba Medical Services both in Winnipeg. In 1964, Kay moved to the U.S.A. where she spent a brief period in Portland employed by Blue Cross. She then began a 25-year career with AT&T/Pacific Bell, first in San Francisco, then 11 years in Los Angeles and finally 12 years in San Diego where Pacific Bell opened a new branch and needed experienced circuit designers like herself. She retired on December 31, 1989. Kay and husband William Starkell lived in San Diego for 24 years and had a beautiful home in Rancho Bernardo. After Bill died in 2000, Kay moved to Winnipeg to be closer to her extended family.
Kay was predeceased by parents, Dmytro and Sophia Zinkowski (nee Hryhorchuk), brothers, Michael and Emil, sisters, Anne, Mary, Olga, Helen, Rose and Nettie. She will be missed by sisters, Jean, Evelyn and Frances and many cousins, nieces, nephews and friends.
She will be remembered for being fiercely independent, for her clean house and organizational skills, for her lemon squares and other culinary delights, for her smile and sparkling eyes, for her kindness and generosity, for her love and feeding of birds, for her interest in and conversations on many topics and for her love of family, amongst many other things.
Funeral service will be celebrated Friday, August 2, at 2:00 p.m. at Cropo Funeral Chapel, 1442 Main St., Winnipeg. Interment will follow later.