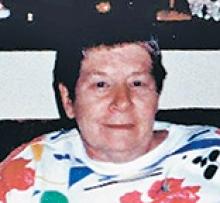 
Shirley Christina Appleyard (nee Graham) of Winnipeg, MB, aged 87, passed away after a lengthy illness, on Sunday, July 14, 2019. She was born to the late John Watt and Elizabeth Carr (nee Smith) Graham on June 22, 1932, at West St. Paul, MB.
She was left the widow of Bruce Albert Appleyard of Stonewall, MB since October 31, 2005. Her son, Graham Ervin Allison of Vancouver, BC, born September 19, 1955, passed away on April 29, 2017 and her infant daughter, yet unnamed, of Winnipeg, MB, died shortly after birth March 28, 1959.
Also predeceased by her brothers, stepbrothers, and stepsister: Angus John Graham (2005) of Palm Springs, CA, Gary Wayne Graham (2018) of Edmonton, AB and Richard John (Catherine Elizabeth) Graham (2007) of Vancouver, BC, baby Reginald Watt Graham (Twin) (1916) of Grahamdale, MB, Percival Marcus Graham (Twin) (2001) of Winnipeg, MB, Lawrence Alvin Graham (2016) of Winnipeg, MB and Gwendoline Alzina Hobson (nee Graham) (2001) of King City, ON.
She is survived by her two daughters and a son: Sandra Elizabeth (Allison) Graham and Richard John (Allison) Graham, both of Winnipeg, MB, and Merry-Lynn Allison of Vancouver, BC. Others include: sisters-in-law, four nieces, eleven nephews, cousins and her two beloved cats.
She cherished ALL of her friendships and tried to remember everyone's special occasions by sending out cards or by making a simple phone call just to touch base. To all her family, friends and neighbours, she appreciated you for being that part of her world that made it such a beautiful place: Karen, Helen and Bill, Gabby, Diane and Harry, Cheryl, Darlene, Allie, Auntie Doreen, Auntie Bunny, Marilyn and Terry, Diana, Mary, and her cousins - Beverly and Connie.
Doreen Abraham has been a very special friend to Mom and the whole family for many years. Thank you for always being there, Doreen.
She gave us a lot of laughs and many great memories. Mom had a good soul, was a true friend, and was the best mother four "savages" could have had.
Complying with her wishes, cremation has taken place and no service will be held.
The family wishes to thank everyone for their kind thoughts and prayers.