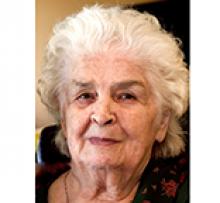 On August 2, 2019, at the age of 89, our dear mother, baba and friend Julia Wyshnowsky passed away peacefully at Concordia Hospital following several health challenges.
Julia was predeceased by her adoring husband Dmytro in 2004, and infant son Yuri, who she lost in 1952.
Left to cherish her memory are her children: Olga (Gord Ptashnick) and their daughters, Janelle, Victoria (Corey Mintz), Michelle and Carly (Mena); and son Jerry (Carol Roberts).
She was born on October 5, 1929, in the western Ukrainian village of Berhomet. With the outbreak of the Second World War, Julia's family was forced to flee. Hiding in forests, barely surviving, Julia's trademark courage and grace got her through this tumultuous time, as she dodged death many times. Instead of being hardened by the hardships she endured, she gained a sense of empathy for those facing enormous adversity. These experiences would go on to be the bedrock of her feisty, generous spirit that was always full of gratitude.
The war's end found a teenaged Julia in a crowded, German refugee camp. There, she met and married Dmytro, a soft-spoken Ukrainian tailor who adored her. He brought gentleness to her strength and they would go on to build a life together that was made possible by their incredible work ethic and their dedication to build a successful life for their children.
The following year, 1948, they moved to Venezuela. As an immigrant, Julia adapted quickly to a new culture and language. But the death of her infant son compelled the young couple to again seek a new life, this time in Canada. Short on resources but strong of will, Julia and Dmytro thrived in their adopted country. Learning English, her fourth language, she became an active member of Winnipeg's Ukrainian community, participating in cultural, religious activities and events.
Julia found strength in her family, traditions and faith. She adored her grandchildren and took every opportunity to build special, lasting relationships with them, delighting in their accomplishments and praying for their happiness and success.
Julia was a skilled seamstress who also excelled at embroidery, and who took pleasure in tending to her gardens. She loved to cook and bake for family celebrations, and especially sharing with friends and neighbours.
She was a compassionate and kind woman who will be missed by all those who had the privilege of knowing her. In Julia's later years, she often spoke of the time when she would be reunited with her beloved Dmytro, whom she has now joined, in peace.
Prayers will be held on Thursday, August 8, 2019 at 7:00 p.m. at Cropo Funeral Chapel, 1442 Main Street. Funeral services will be held at St. Mary the Protectress Cathedral at 820 Burrows Ave. at 10:00 a.m. on August 9, 2019, followed by interment at Glen Eden Cemetery.
In lieu of flowers, those wishing to honour Julia's memory may make a donation to either St. Mary the Protectress Cathedral or to a charity of one's choice.