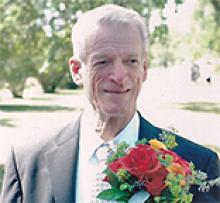 On Thursday, August 8, 2019, our beloved father and Didus passed away peacefully at the age of 89.
Peter was one of five children born in Senkiw, Manitoba on October 14, 1929, to Ukrainian pioneer settlers, Michael and Anna Maruschak (nee Zaporozan). His childhood on the family farm involved adventures with his dog Cappy, a pet deer, learning in a one-room school, listening to his favourite radio show "The Shadow" and crossing the Roseau River in a basket suspended on a wire to get to the post office. Growing up in the Gardenton and Senkiw districts resulted in a lifelong devotion to that part of the province and Peter was a dedicated supporter of the area's historic St. Michael's Ukrainian Orthodox church.
During the Second World War Peter's older brother John joined the army and was taken prisoner in Hong Kong. Eager to help his brother, Peter also enlisted despite the fact that he was only 15. When his mother discovered he was on the verge of being shipped overseas, she contacted her local MLA, John Solomon, to tell him Peter's true age and to ask him to intervene. The war ended before Peter was old enough to see active service, but he nevertheless stayed in the military for a few years, primarily serving in Ottawa as a driver. In the 1950s his sense of adventure led him to work in the Canadian Arctic on the construction of the radar stations of the Distance Early Warning (DEW) Line. Up north he developed a love of nature, and afterward enjoyed fishing and hunting whenever he had the opportunity.
In 1967, Peter married his wife Mary after he first caught her eye dozing during services at Holy Trinity Ukrainian Orthodox Cathedral. They were married and constant companions for almost 52 years until she passed away in April of this year. Soon after they married, Peter started his own machine shop which he built from a one-man operation into a successful business - Maruschak-Atlas - which he ran until his retirement. His success as an entrepreneur made him a role-model for many of the young people he employed and allowed him to help new Canadians, as he gave many immigrants recently arrived from Ukraine their first work opportunities in Canada.
Peter was a dedicated member of Winnipeg's Ukrainian Orthodox community and he served on the boards of organizations such as the Ukrainian Voice newspaper, St. Andrew's College and the Order of St. Andrew. He was a dedicated member of the Holy Trinity Ukrainian Orthodox Cathedral from the time he moved into Winnipeg, attending services faithfully and even serving as the parish president in the 1980s.
Peter was a supportive parent to his children and a proud grandfather and worked many long hours in his business to ensure his family was provided for. Peter was predeceased by his parents, his brother John, and sister Marie. He will be lovingly remembered by his sons, Ray and Stephen, daughter Patricia, son-in-law Keith Swinton, and grandsons, Serhiy, Ihor and Paul, as well as by his brother Bill (Anne), sister Iris (Mike), and his many nieces and nephews.
Prayers will be held Thursday, August 15 at 7:00 p.m. and the funeral service on Friday, August 16 at 10:00 a.m. Both will be at the Holy Trinity Ukrainian Orthodox Cathedral where Mary and Peter had been members for over 50 years.
In lieu of flowers, donations can be made to the Holy Trinity Cathedral or to a charity of your choice.
Publish Date: Aug 13, 2019