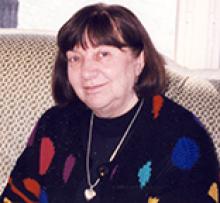 
It is with great sadness that we announce the passing of Patricia Joan Landolfo on August 3, 2019, at the Grace Hospice, Winnipeg, Manitoba.
Patricia will be sadly missed by her son Kevin (Carolyn); granddaughters, Gabriela and Olivia; brothers, Ivan Campbell and Warren Woods; and sisters, Judith Dufrat (Donald) and Elizabeth Woods.
Patricia was predeceased by her mother and stepfather, Phyllis and Earl Woods; brother and sister, Ronald and Fay Campbell; and friend, Peter Huebner.
Patricia was born in Souris, Manitoba, on July 14, 1937, the youngest child of Phyllis and Charles Campbell. Pat's early childhood was spent on the Woods farm in the Miami/Rosebank area. She spent much time out-of-doors with her faithful dog, Nero, and her horse, Bob. At the age of six, she attended a one-room rural school, with Miss Stevenson as her teacher. Of the three children who started that fall, the two girls eventually earned PhD degrees.
Pat was a big sister when her parents left the farm and moved to town. She attended schools in Rosebank, Manson and Virden. After graduating from high school, and a six-week summer school course for permit teachers, she taught for one year. This was not her calling, but she enjoyed being back in the country in a one-room school.
The next year, she enrolled in a medical technology program at the Misericordia Hospital in Winnipeg and began an almost 50-year association with this institution. After graduation, Pat wanted more adventure, and applied for a job as a technologist in a hospital on a sugar cane plantation on the island of Oahu, Hawaii. Pat lived in Hawaii for two years, where she met and married her husband, Paul. When the marriage ended, Pat returned to Manitoba, settled down to raise her son and returned to the Misericordia Hospital as a technologist. While working fulltime and raising her son, she attended university evening and summer school. She graduated with a BSc degree when her son was six, then a MSc degree when Kevin was in junior high school. Finally, Pat accomplished her goal, which was to attain her PhD degree in Microbiology before her son enrolled in university.
During her career as a microbiologist, Pat was director of the clinical microbiology labs at the Misericordia, Grace, Seven Oaks, Victoria and Riverview Hospitals. In addition, she served as a consultant at the Thompson General Hospital and other northern regional hospitals. She was a director for several private laboratories in Winnipeg, rural Manitoba and Northwest Ontario. During this time, she maintained her association with the University of Manitoba, as well as working on many professional committees, both locally and nationally.
In 2003, Pat retired from the hospital laboratories, and in 2007, from her consulting work. Pat then had more time to spend at her Victoria Beach cottage, something she and her son had begun building in 1985. She spent part of the winters in Augusta, Georgia and Ponte Vedra Beach, Florida, with her son, daughter-in-law and, the big draw, her two beloved granddaughters. She had time for quilting, gardening, some travelling and renovating her condo and cottage. She joined Creative Retirement and met new friends and learned to play bridge.
In 2011 Pat was diagnosed with ovarian cancer. With quiet courage and resolve, she fought this disease. Over the past eight years, there have been many people who touched Pat's life.
The family wishes to thank the doctors, nurses, and staff at CancerCare Manitoba, the staff at Guildy's who made the toast with extra butter, the palliative care team who were only a phone call away, Comforts of Home people who truly provided comfort, the Patient Transport Services drivers who made Pat's last trip to Victoria Beach possible, the staff at the Grace Hospice, Pat Walsh, Joan who sent a card every week, and all the friends who phoned, visited and cared.
As a member of the Altrusa Club of Winnipeg, Pat helped to establish a University of Manitoba award to be given to a female student in pursuit of a professional degree. The first award, given in 1986 to a nursing student, was enough to buy only a textbook. The award presented in 2018 was enough to pay most of the year's tuition. In lieu of flowers, a donation may be made in Patricia's memory to the Altrusa Club of Winnipeg Award, in care of Financial Aid and Awards, 422 University Centre, Winnipeg, Manitoba R3T 2N2.
A memorial service will be held at a later date.