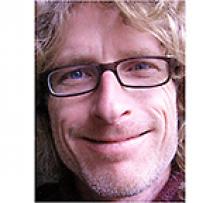 
Suddenly on Thursday, August 1, 2019, Jonathan, beloved brother, uncle, cousin, friend and yogi, passed away at the age of 58.
Jonathan was born in Newcastle, NB to Don and June (Friesen) Austman, where the family was stationed at nearby St. Margarets, as Dad was in the R.C.A.F. Jonathan's early life as a rambunctious carrot top was one of living in various places across Canada, as is the life of every Air Force brat, before the family settled in Winnipeg in 1971.
After high school, Jonathan was involved in the music scene in Winnipeg, which led to working with the likes of the Wyrd Sisters, Acoustically Inclined and Al Simmons, as well as being involved with the Winnipeg Folk Festival, the West End Cultural Centre, and the music recording industry in Winnipeg. A back injury had Jonathan turn to exploring yoga as a way to heal himself, which in turn became the major focus of the rest of his life. He immersed himself into Ashtanga yoga, studying in India with Sri Pattabhi Jois, and spending time in Toronto, and at the Kripalu Yoga Centre in Massachusetts. For several years, he had his own yoga studio in Winnipeg before taking his talents to Yoga Public. He was the yoga teacher's teacher, training many people over the years. Jonathan imbued kindness and compassion, integrity and wisdom, into everything he did, his quiet calm a notable quality.
Jonathan was preceded in death by his parents, Don and June, and his eldest sister Laurel. He is survived by his sisters, Shannon (Orla), Pamela and Melissa (Cameron), and brother Todd (Laurel), brother-in-law Les, nieces and nephews, Matthew (Andrea), Lexie, Sean (Katie), Brendan (Jen), Bailey and Noah, and his great-nieces and nephews, Kailyn and Rylee, Nate and Gwen, Stella, and Eric. He leaves to mourn so many cousins, aunts, uncles, friends and the yoga communities in Winnipeg and Toronto and wherever his multitude of students have settled.
Over the years, Jonathan had embraced Buddhism and lived a simple life. He has now found a peace he could not attain here. "This world is shrouded in darkness. Here, only a few can see their way free. These few birds escape from the net, and fly away to the heavens." - quote from the Dhammapada.
A celebration of Jonathan's life will take place on August 24, 2019 in the Provencher Ballroom at the Hotel Fort Garry, 222 Broadway Avenue, Winnipeg, from 1:30 p.m. to 5:00 p.m. Doors open at 1:00 p.m., and program starts at 1:30 p.m. Cremation will take place with Friends Funeral Service.
In lieu of flowers, please donate to the charity of your choice and be sure to hug your loved ones, talk to them, listen to them and tell them you love them. Jonathan would wish that all who attend not wear black, but don whatever colours you would wear if you were going to visit him.