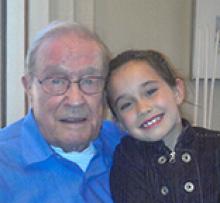 With his family by his side, George passed away on August 8, 2019, at Concordia Hospital, after a brief illness.
He is survived by his two children, Bill (Valerie Price) and Elizabeth (Ian White); and granddaughter Elizabeth White; as well his sisters, Jean Robertson, Pat Vanderhorst, Gladys Holowka; and brother Bob Currie; plus their families. He was predeceased by his wife Deborah (nee Tibbs) and parents, Bud and Gladys Currie.
George was born in Vancouver on March 11, 1925 but the family soon moved to Winnipeg. He grew up with his four siblings at the family home on Martin Avenue in Elmwood and spent many memorable summers at their cottage in Lac Lu. Their home was always full of music and they enjoyed many sing-a-longs. George met his future wife Deborah at the Kildonan Canoe Club, but was called up for service in Royal Canadian Naval Volunteer Reserve in 1943. Upon his return he completed his education at the University of Manitoba receiving a degree in Mechanical Engineering. He began his career at various engineering firms until finally joining Smith Carter Architects in Winnipeg. There he made many life-long friends including the famous Pisces Island Fishing Group. In the 1970s George started his own professional engineering firm, G.H. Currie & Associates, which he ran successfully for over 30 years, contributing to the creation of many local award winning buildings. Then coming full circle, he finished his career heading Mechanical Engineering at Smith Carter Architects.
George loved the outdoors and was always happiest on the water, whether it was fishing, boating, or in the Netley Marshes hunting ducks in the fall. One of his favourite places was the cottage he built at Clearwater Bay.
George always enjoyed socializing with his many friends and colleagues. Over the years he generously provided for his family and in later years delighted in the time spent with his granddaughter Elizabeth.
A private family interment will be held in Elmwood Cemetery. A celebration of George's life will take place on Saturday, September 14, 2019 at 2:00 p.m. at Thomson Funeral Home, 669 Broadway.
In lieu of flowers, donations may be made to Ducks Unlimited or a charity of choice.
The family would like to thank Dr. Singh and Dr. Benoit at Concordia Hospital for not giving up on our Dad in his final days. We would also like to thank the staff of Kildonan Personal Care Centre for the time and attention you gave to our Dad.

Condolences may be sent to
www.thomsonfuneralchapel.com