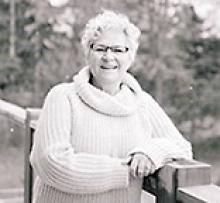 Sandra Eileen Janzen (nee Fehr) was called to her loving Heavenly home August 3, 2019.
Born October 6, 1957 in Winkler, Manitoba to John J. and Mary (Peters) Fehr, Sandra was the third of five Fehr children.
On September 21, 1979 Sandra was wed to the love of her life Dale Janzen, with whom she spent the next nearly 40 years with, as a wife, mother, partner and friend. Their love was one of true tenderness, a true love story. They shared two daughters who meant the world to Sandra, Kristin Bozyk (Joe) and Monica Danylchuk (John).
In 1979 Sandra and her father John started the business named Fehr Way Tours. Sandra was a natural people person who loved seeing the smiles of their clients, clients who in turn loved dealing with the ever pleasant Sandra, who sincerely enjoyed their company as they travelled North America. She also showed genuine leadership skills as she and Dale participated in the family business. They would later go on to start a new venture in 2007 with their daughters Kristin and Monica named Spalifestyle and Boutique Inc. which is still run by their daughters.
Sandra's charisma shone the brightest. She was really a shining star, perhaps too bright for this world. She possessed the uncanny ability to make anyone at any time feel special and loved. She was known for her quality of character where she put others before herself, even when she found herself ill. If anyone she cared for, family or friend, was in need, Sandra was there to lend an ear or shoulder to cry on; to do whatever it was she could do to help up until the very end.
Sandra and her enchanting laugh will be missed by all, especially those she is loved most and remembered by; her husband of just shy of 40 years Dale Janzen; daughters, Kristin Bozyk (Joe) and Monica Danylchuk (John); her beloved, cherished grandchildren, Noah Bozyk, Ethan Bozyk and Madeline Danylchuk. Also surviving are her mother Mary (Peters) Fehr; sisters, Rosie Klassen (Peter), Lorraine Toews; brother John D. Fehr; and sister Diane Fehr Palmer (Mil); as well as her brothers-in-law, Bruce (Charlene) Janzen, Gary (Karen) Janzen and Warren (Dorothy) Janzen; and many nieces and nephews. She was preceded on the journey to her Heavenly home by her dear father, John J. Fehr and her father-in-law and mother-in-law, Jake and Dorothy (Toews) Janzen.
The family would like to extend a heartfelt thank you to Dr. Salter Oliver and Dr. Erin Dean; as well as a profound thank you to all the doctors and nurses at CancerCare, all the doctors and nurses at Palliative Care especially Kyah were incredible.
A celebration of Sandra's life will be held at McIvor Church, 200 McIvor Ave. Friday, August 16, 2019 at 12:00 (noon). Pastor Gary Janzen and Reverend Warren Janzen officiating.

For God so loved the world, that He gave His only Son, that whoever believes in Him should not perish but have eternal life.