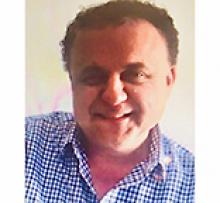 It is with profound sadness, we announce the passing of beloved husband, father, son, brother, and uncle, Gianluca Racciatti on July 27, 2019.
He leaves to mourn his beloved wife Trina Mahon-Racciatti, and their son Luca; parents, Maria and Armando Racciatti; sister Laura (Rick) Masi, brother Enrico (Ogai Sherzoi) Racciatti, nephew Grayson Sherzoi-Racciatti, mother-in-law and father-in-law Eleanor and Rudolph Mahon of Barbados, and many aunts, uncles, and cousins in Winnipeg, Italy, and Argentina, as well as many friends.
Gianluca was born and grew up in Winnipeg. He graduated from the University of Manitoba with a Bachelor of Education degree. He worked for many years as a teacher with the Seven Oaks School Division teaching Music and French. But always looking for new challenges, he later joined the financial industry as an advisor and became a Senior Marketing Director. He earned much respect and admiration from the people he taught and worked with.
Teaching was Gianluca's forte, and his love for music was evident. He was a talented musician and virtuoso guitar player. Although his greatest love was playing the guitar, he could play almost any instrument. He loved his family deeply, and he will be greatly missed.
Mass of Christian Burial will be celebrated on Thursday, August 15 at 11:00 a.m. at Holy Rosary Church, 510 River Avenue. Friends may bring their condolences one hour prior to the service at 10:00 a.m. Interment to follow at Waverley Memorial Gardens.
In lieu of flowers, please make a donation to a charity of your choice.