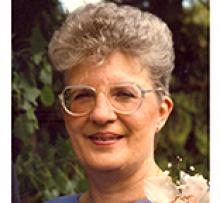 Peacefully, on July 13, 2019, Olive Kostyshyn passed away at the age of 82 years.
Olive was born on February 17, 1937 to Dorothy and Andrew Legin, in Rouleau Saskatchewan, the eldest of three daughters.
The family moved to Winnipeg in 1944.
Olive's formative years were characterized by Ukrainian Cultural Activities, piano lessons and a budding love of sports.
In 1961, Olive married Roman Kostyshyn and together they raised three children
Upon graduation in 1955, Olive embarked on a long and varied career which included teletyping at CN, managing her husband's construction business, the Winnipeg Blue Bombers and Carpathia Credit Union.
After retirement Olive pursued various volunteering opportunities at the Pan- American Games, Canadian Curling Open, World Women's Hockey Championship and most recently the UCWLC.
Left to cherish her memory are daughters, Vera (John Nicholson), Lydia (Americo Fernandes); son Bill; grandchildren, Emily and Roman Nicholson; Adam and Daniel Fernandes; sisters, Yvonne Mudlo and Nadia Carrigan (Jim) along with numerous nieces, nephews, friends and extended family.
Olive was predeceased by her husband Roman in 1996, her parents, brother-in-law Walter Mudlo, and all of her in-laws on Roman's side.
The family would like to thank the nurses and staff of 1-North at West Park Manor for the excellent care provided to our mom.
Divine Liturgy will be celebrated at 10:00 a.m., Saturday, August 17 at Holy Family Ukrainian Catholic Church, 1001 Grant Avenue with Rev. John Mostivsky officiating. Interment to follow at All Saints Cemetery.
In lieu of flowers, donations may be made to the Holy Family Maintenance Fund or to a charity of one's choice.