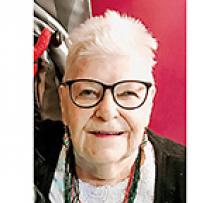 Peacefully on August 10, 2019, at the Grace Hospice, Mom slipped away from us to join her son Garth; sister and best friend Joyce; brother-in-law Wally Naherny, as well as brother Bill Scott.
Mom leaves to mourn her passing daughter Dawn (Gord) Turcan; sons, Scott and Darren Deason; grandchildren, Jennifer (Kraig) Irvine and David Turcan; great-grandchildren, Olivier Turcan and Lexis Irvine, as well as many nieces and nephews of several generations.
Mom was born in Winnipeg on September 27, 1933 and was raised in Swan Lake, Manitoba where her mother Corina, a mid-wife, operated a nursing home. Mom first started working as a telephone operator, but excelled in her 30 year career in the hotel dining and banquet industry, mainly at the Holiday Inn in Vancouver and then in Winnipeg, where she received many awards and accolades.
Family was a very important part of her life. Mom, along with her sister Joyce, organized many extended family gatherings, creating a very close knit family that will be forever cherished. Christmas was Mom's favourite season and no one could out decorate her. There could never be enough tinsel on the tree.
Mom was a fiercely independent person who strived to make her own way, on her terms, in whatever she endeavoured. In failing health she maintained this stance...Never a complaint and "all is well".
We wish to thank the staff at the Grace Hospice and her previous homecare girls (Ana and Esther) for their care and compassion.
A memorial reception will take place on Thursday, August 15 at 1:00 p.m. at Thomson Funeral Home.
In lieu of flowers, donations may be made in Mom's memory to the Canadian Cancer Society, Manitoba Division, 193 Sherbrook Street, Winnipeg, Manitoba R3C 2B7.